Many are familiar with Rhizosphaera needlecast of spruce. If you aren’t, please see these two articles by Janna Beckerman and  Megan Haas for more information about the disease and it’s management on spruce. The common name for the disease, needlecast, describes the ultimate fate of the needles: they are cast off. Loss of leaves or needles hurts some trees more than others (Figure 1, 2, 3). 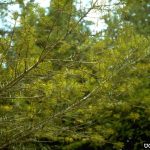 Figure 2: Closer image of Figure 1, showing some of the needle necrosis and bare areas on the stem. Image Credit: Frantisek Soukup, Bugwood.org 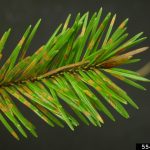 Deciduous trees can tolerate some leaf drop each year with little harm, but conifers put a lot of energy and resources into making their needles, which remain on the tree for 2-5 years in most species. Some pine trees hold onto one or two years of needle growth while other pines and many other conifers retain their needles for much longer and rely on them to produce food, which is why if they fall off prematurely it can lead to decline and/or death of individual branches and reduced plant vigor. Branches that lose needles will remain bare because conifers do not sprout new growth from old wood the way deciduous trees and shrubs can.

Within the last few weeks the Purdue Plant and Pest Diagnostic Laboratory has been receiving samples of pine and fir trees with needles turning brown from the tip back and severely affected needles falling off the tree. Many different fungi cause needle cast diseases; and some, like Rhizosphaera on spruce and Swiss needle cast of Douglas fir cause extensive damage, but most are weak pathogens that infect plants that are stressed, or are planted in the wrong site.

Most needlecast diseases can be found in the inner canopy near the bottom of the tree where there is more shading, less air movement, increased humidity and longer periods of leaf wetness. As the disease progresses, it spreads outward and upwards, gaining speed as the tree becomes more stressed. Needles will gradually turn brown, either along its length or from the tip back, before falling off of the stem. Chronic disease will lead to bare inner branches and dead, lower limbs of severely affected trees.

Some of the needlecast fungi we found in the lab recently include Lophodermium (Figure 4, 5), Ploioderma (Figure 6), and Dothistroma (Figure 7, 8) on pines and Rhizosphaera pini on multiple firs (Figure 9, 10), which all produce small black fungal structures on the needles that can look fairly similar and can be difficult to differentiate them without the use of a microscope. These structures may not always be apparent, especially during dry spells, so you may need to place needles in a humid environment (like a plastic bag with a moist paper towel) for a day or two before looking for structures on older or cast-off needles. 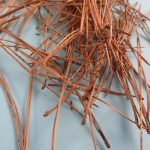 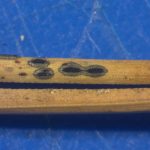 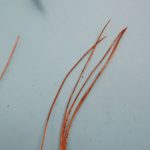 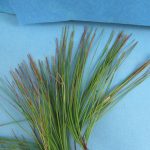 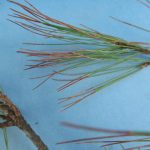 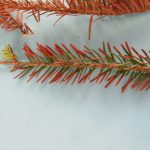 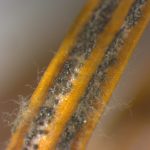 Figure 10: Close up image of fruiting bodies produced by Rhizosphaera from the stomates on the underside of the Fir needles. Fir needles also have a strip of stomates along the middle of the upper surface of the needles where Rhizosphaera can also be seen growing. Image Credit: PPDL

Cultural management options can significantly reduce the severity of needle cast diseases. These diseases tend to cause more damage to trees that are crowded and shading each other, so it is important to maintain adequate spacing for good airflow and light penetration. Removing weeds and mowing grass to reduce the height of other vegetation near the base of the tree will also help increase air movement and reduce leaf wetness duration. Prune out and destroy or burn dead limbs.

When selecting a tree for a particular location, make sure it is adapted to thrive in the conditions of that site. Soil conditions generally need to be moist, but well-drained soils that are moderately acidic for most conifers, although some conifers, such as Norway spruce, may tolerate a wider range of conditions. Avoid planting trees that are highly susceptible to needlecast diseases, such as Colorado blue spruce.

Fungicide programs can help manage needlecasts, but some fungi can be present in an infected needle for months to over a year before symptoms become visible, which makes determining spray timing difficult. First, an accurate diagnosis is needed to determine the best timing for application and recommended fungicides for management, but also to determine how long of a spray schedule you will need to clear up the disease (single year or multi-year program). When trees are losing many lower limbs due to attrition and reduced vigor, it may be a good idea to replant with a healthy, resistant variety.