The Colorado Blue spruce is not native to Indiana and tends to be susceptible to disease.  One common disease, caused by the fungus Rizosphaera kalkhoffii, results in the defoliation of the tree.  If left untreated needlecast can lead to the death of the tree. 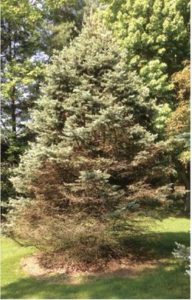 Symptoms of needlecast don’t develop until two to three years after initial infection.  Needles will turn a purplish brown color and fall from the tree.  As needles fall the branches of the tree will start to die.  The disease typically starts in lower portions of the tree where humidity and temperatures are higher.  However, it is not uncommon to see disease develop in patches higher in the tree. 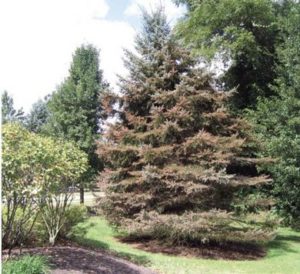 Rhizosphaera overwinters in the needles then sporulates in the spring when temperatures become warm and humidity rises. The spores, called pycnidia, form rows of black dots along the length of the needle that are visible to the naked eye. 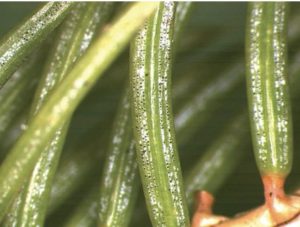 When planting spruce choose a location with well drained soil that can be kept watered.  Properly space and prune trees to promote good air circulation.  If infection occurs, remove diseased branches and burn, bury or hot compost them.

Fungicide treatment can control Rhizosphaera in one year if it is caught early and proper application occurs.  Always follow fungicide label directions when applying.  Fungicides that are copper based or contain chlorothalonil are effective against Rhizophaera First application should occur when new needles are half elongated, usually in late April or early May.  A second application should made three to four weeks later.  If the fungus persists or wet and humid conditions occur and third application should be made.  If the tree is severely infected, it could take two or more years to control.  Reinfection can also occur.