Although the canopy of many newly planted elm trees may look tattered, elms are vigorous growers that can survive the onslaught of defoliating beetles. 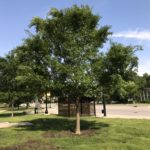 Leaves infested with elm flea weevil have one or more brown areas produced by leaf mines feeding inside the leaves. Leaves may also be peppered with holes in early spring and in late summer. From a distance the accumulation of holes can give a tree a faded appearance.  Holes produce by elm flea weevil are less extensive than feeding by Japanese beetles that will begin in a few weeks. 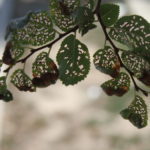 Figure 2. Round holes in tissue between leaf veins left by elm flea weevil. 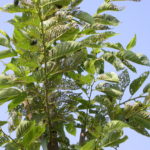 Elm flea weevil, Orchestes steppensis, is a relatively new pest that was first reported in 2002 in Indiana. as a European species Orchestes alni, that replaced elm leaf beetles as the most important early season elm defoliator. Dave Shetlar and James Radl of Ohio State recently identified this pest and determined that it is of Asian origin. 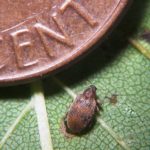 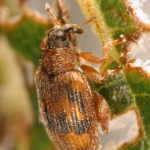 Adult beetles overwinter in the leaf litter and begin flying in search of elm leaves that have just emerged from their buds. Eggs laid in leaves produce the grubs which make June mines. Adults emerge from leaves and feed on leaves until they overwinter. There is one generation per year. This insect is more of a problem on newly planted trees where foliage is low enough to the ground for injury to be noticed. As trees get older and larger the small holes in the leaves and leaf mines are difficult to detect in the vigorously growing trees. This pest is unlikely to harm the health of larger trees.

Soil applied systemic insecticides (imidacloprid) should be applied in the fall to kill leaf miners during the following spring. Spring applications of imidacloprid or dinotefuran reduce, but do not eliminate injury, when they kill leaf miner grubs and adults. Foliar sprays of broad spectrum insecticides like a bifenthrin or carbaryl directed against adults in spring can reduce mine formation. Elms are pollinated by wind, not bees.

Research on resistant elms from the National 10 year elm trial show a wide variation in susceptibility to this pest. Studies conducted in Ohio, Kentucky and Indiana indicate that Holmstead and Frontier hybrid elms are particularly susceptible to defoliation by both the elm flea weevil and the Japanese beetle.  Valley Forge and Princeton elms are two American elms that are resistant to these pests. Accolade, Emerald Sunshine, Morton Stalwart are two hybrid elms that are also relatively resistant to these beetles.