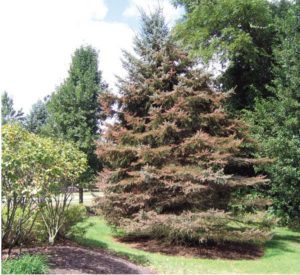 Colorado blue spruce is not native to Indiana (no spruce is!), and it often suffers from environmental stresses such as drought, excessive heat, humidity, and compacted or heavy clay soils—making it an already poor choice for our landscape. If that weren’t enough, it also suffers from needle cast diseases. Needle cast is a generic term that refers to foliar diseases of coniferous plants that result in the defoliation (“casting off”) of needles. Needle casts vary by host, and severity is dependent upon the age of infected needles.  Of all the foliar diseases affecting woody landscape plants and shrubs, needle casts are the most serious for the simple reason that coniferous plants do not have the ability to refoliate, or produce a second flush of needles from defoliated stems. Rhizosphaera needle cast is a fungal disease, caused by Rhizosphaera kalkhoffii  that attacks the needles of Colorado blue spruce in the spring, as new needles emerge. However, infected needles often don’t show symptoms right away, and may take one to three years to develop. Infected needles later turn purple to brown and fall from the tree prematurely (Fig. 1), leaving the inner portion of the branch bare. 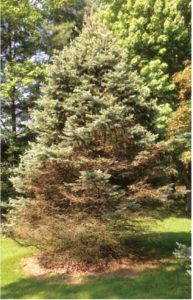 Fig. 2. As the disease spreads up the tree, lower branches begin to die.

As the disease progresses, severely infected branches die, leaving the tree with a hollow or thin appearance (Fig. 2). The disease usually starts near the base of the tree where humidity levels are the highest, but continues to spread upward. As the disease continues, trees become unsightly and lose their value as a visual screen or privacy fence.

The Rhizosphaera pathogen sporulates in the spring (Fig. 3), which is the best time to control this disease. The fungal fruiting structures emerge on these needles and are usually large enough to be visible to the eye, with the fruiting structures appearing as rows of small dots running lengthwise along the white bands of the needles. In severe infections, trees may only have the current year’s needles remaining rather than the 5- to 7-year complement of needles a healthy spruce maintains. Destructive epidemics of needle casts or rusts are not uncommon, and develop under periods of extended leaf wetness. The after-affect of these epidemics can persist for several years. In the urban setting, needle casts are more of an endemic, as most conifers are ill-suited to the Midwest urban environment. Most conifers retain their needles for two to seven years. The length of time that a needle is retained depends on the species of coniferous plant and if the plant has been subjected to stress such as drought, flooding, salt damage, disease, or insect pest. Trees that lack the full complement of needles are stressed or undergoing pest attack. When attempting to determine the cause of needle drop, examine the branch carefully to determine if the problem is normal needle drop, the yearly occurance on normal needle shedding. The newest needles should not be affected and problems should not appear within the last two to three years of growth. 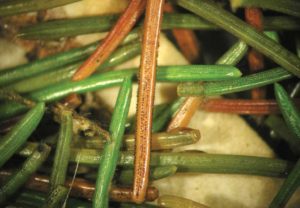 Spectro-90, or copper-based fungicide, can protect new growth and prevent new infections; Concert II, Heritage, Pageant, and Trinity are labeled for use in commercial and residential landscapes, and nurseries, but data regarding their efficacy is lacking for this disease. Daconil Weatherstik is not labeled for blue spruce in the landscape but is still available for use in the nursery and for other landscape diseases.

It is important to protect new growth as it emerges no matter which fungicide you apply; fungicides should be applied when the new needles are half elongated (late April or early May) and again three to four weeks later, possibly with a third application if wet weather or growth persists. Rhizosphaera needle cast may be controlled in one year if fungicides are applied correctly. However, severely infected trees usually require two or more years of fungicideapplications. Even though fungicide application will effectively control this disease, reinfection may occur in subsequent years. Application to large trees requires special equipment to ensure adequate coverage. Read fungicide labels carefully and apply only as directed.

When planting new trees, consider planting Norway or white spruce, which are more resistant to Rhizosphaera. Other spruce, like Serbian, simply haven’t had widespread evaluation in the Midwest, so buyer beware! Properly spacing spruce trees will help reduce disease incidence. Spruce trees grow best in moderately moist, well-drained soils but can be planted in other soils if adequate moisture is available. Avoid heavy clay, as trees planted on these sites often suffer iron, magnesium, and manganese deficiency. Water newly planted trees, and water during drought periods to help maintain tree vigor and minimize stress. Stressed trees should also be mulched and fertilized as needed. Properly prune dead or severely infected branches during dry weather. If trees are severely infected, the lower whorl of branches may also be removed to help increase air circulation.