Late frosts and wet weather were especially hard on oaks this spring. Surviving leaves on many oaks did not grow normally. Sustained warm weather in the summer will allow oaks to grow past their injury and thrive. 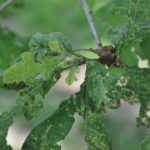 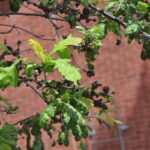 Oak tatters is a common response to cold snaps in the late spring.  Leaf growth is distorted. Affected portions of the leaf do not expand normally and appeared to have been chewed and left in tatters. Nothing can be done to remedy the situation other than to wait until new growth occurs.

When the weather warms, healthy oaks will grow new leaves to replaces those that have been distorted by tatters.  Most trees will survive bouts of tatters.

Adult flies make holes in leaves that when they lay eggs into expanding leaves.  Eggs hatch into a  maggot that makes a small blotch mine in the leaf. When the leaf tissue drops out, the shothole remains.  There is one generation a year. Control is not recommended because it is difficult to time due to the short lifecycle of the fly and the erratic spring weather patterns. 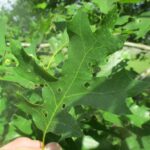 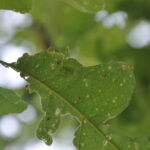 Lacebugs are sucking insects that can attack healthy and tattered leaf tissue.  Adults will lay a lawn of black eggs on leaf undersides that will hatch into nymphs that pierce and discolor leaf tissues. There are 3 generations each year. Although lacebug are likely to be present throughout the summer, their injury is not likely to harm tree health.

Wet leaves during leaf expansion in spring will allow the fungus to grow on leaf tissue between veins. This kills the leaf tissue and causes it to turn brown. Later in the season, after leaves mature the fungus will only produce small brown spots on leaves. Although a number of treatments are available it is often not warranted because vigorously growing leaves will replace leaves lost. 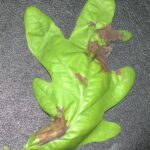 Dead tissue between leaf veins is a symptom of oak anthracnose fungus. 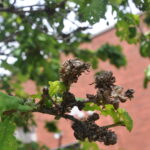 Gall making wasps spending the winter in last year’s bud galls will fly in late spring to attack new twig growth.  Affected leaves and buds grow into a rosette type arrangement that eventually turns brown and kills the tip of the stem.  Despite its unsightly appearance, these insects rarely harm tree health.