Conifer cones are a perennial favorite for fall and winter decorations and crafts and it’s that time of year where we start looking for these coniferous fruits. Or it may be that you have noticed lots of the green, unripe cones on the ground as squirrels work to dislodge them to a better spot for feasting. Regardless, of the interest, there are some interesting facts and lesser-known biology behind our cone-producing trees.

Pinecones (and all true cones) are produced by a group of plants called gymnosperms. Pronounced just as it is spelled (gym-no-sperm) and originating from the Greek language, it translates to mean “naked seed”.  Since gymnosperms do not flower, they do not form a true fruit as an ovary for their seed like acorns, peaches and apples. Their cone is a rigid container for the developing seed which rests on the top of a scale. When the cone is mature and dries out the scales will open, dropping tiny seeds. Also, just to put a finer point on the subject, pinecones are produced on pines, spruce cones on spruces, fir cones on firs, etc. However, nobody typically collects fir cones for decorations, because the disintegrate when they are mature, so they do not fall out of the tree intact.

There are male and female cones on each evergreen. Seed bearing cones are female, while the pollen filled cones are male. Both sexes of cones grow on the same tree, but the male cones typically grow on lower branches relying on the wind to blow pollen up to the female cones.  In some conifers, male cones sit higher in the tree than female cones, allowing the pollen when released to take advantage of this added height in floating farther when the wind or breeze carries it off. Spruce seed cones typically occur on the upper third of the tree, while pollen cones, which are fairly inconspicuous, occur on the lower third to reduce self-pollination. Likely all the cones you will collect for decorating are lady cones, since male cones are significantly smaller, softer, and less conspicuous, and typically after the male cones shed their pollen, they dry out and fall from the trees by mid-summer. 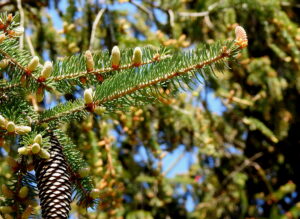 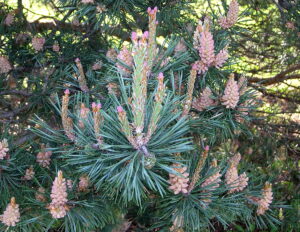 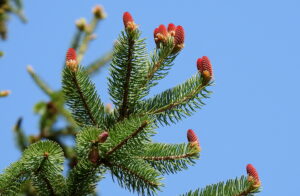 Early female cone development up high on a Norway Spruce

Conifers produce cone crops erratically; there will be years of complete cone failure, years of poor to moderate cone production, and, periodically, years in which a staggering number of cones burden the trees. In such a year, a spruce may produce 10,000 or more cones. Many conifers, including spruces, firs, and Douglas-fir, produce cones in a two-year cycle. Cone buds are produced in the first year and then cones develop and mature in the second year. Other factors which affect cone production include tree stress due to high temperatures and drought. It has been a very dry summer and early fall which will have an impact on many trees this year and next spring as well.

If you notice a difference in pinecone production, it may be an internal mechanism, an environmental impact, or a combination of both. Regardless, trees are often unpredictable with their flower and fruit production but are certainly fascinating!

Thanks to Curtis Young, Ohio State University Extension for providing the images.