Junipers have to be my favorite group of evergreens, behind a select few pine species. They have a fantastic fragrance, are evergreen, many can tolerate drought, are an ingredient in gin (definitely a bonus), and work well in a variety of landscape uses, including as a barrier plant. They look great year round, except when they have tip blight.

Tip blight is a common disease in nurseries and landscapes that cause branch tips to die back fairly quickly starting in the spring. Infected branches become chlorotic, progressing from light green to yellow, before turning brown as the season continues. Black fungal structures will develop in the transition zone between affected foliage and green, healthy tissue. Some of the infected scales may turn gray in color, surrounding these structures.

Two fungi cause tip blight, Kabatina and Phomopsis, and knowing which one you have is important to determine your management strategies. Both fungi produce similar symptoms and similar fungal structures, so the presence of tiny black dots cannot help separate these diseases. Both fungi also infect a range of hosts, including arborvitae, cypress, Douglas fir, true firs, yew, Cyptomeria, and Chamaecyparis, but these are not as susceptible as juniper species. 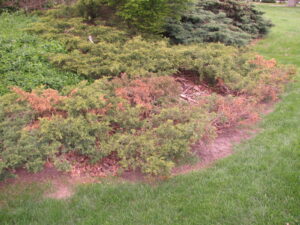 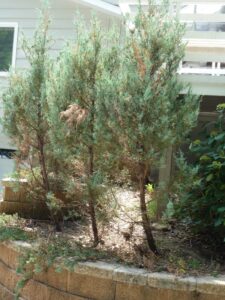 Juniper with tip blight symptoms in the landscape. 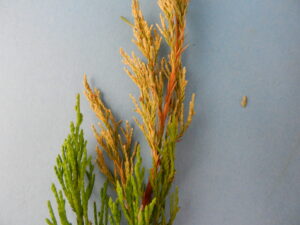 Branch tips turning pale yellow due to infection by Kabatina. 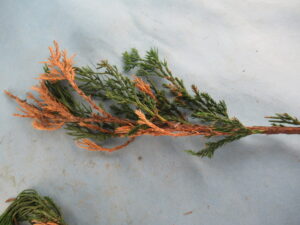 Affected branches turn from light yellow to tan as the season progress. 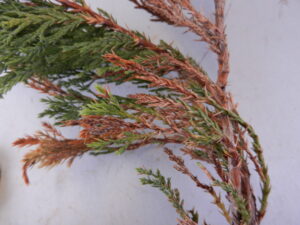 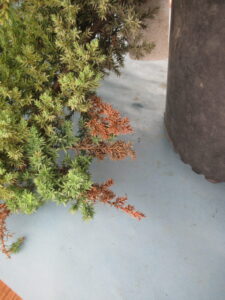 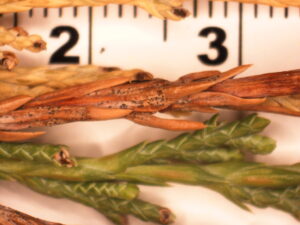 Close up image of fungal fruiting bodies. This is Kabatina, but it is difficult to tell these apart without increase magnification and further microscopy.

Both pathogens require moist and humid conditions to infect the host, so avoid overhead irrigation where possible. For highly susceptible cultivars fungicides are often needed, especially to protect young plants. Timing of fungicide applications can be difficult in the case of Kabatina since symptom development is delayed, but applications made after wounding can help reduce the chance of infection. Fungicides are often not necessary unless disease severity is high. Applications are more frequently required for Phomopsis infections because there can be repeat infections in the same season if conditions are conducive.

An accurate diagnosis is important in deciding the appropriate management strategy between these two diseases, so I recommend submitting a sample for confirmation before planning any fungicide applications.