In early to mid-summer when sucking insects are active and rain becomes less frequent the liquid excrement of sucking insects, called honeydew can accumulate on leaves.  The sweet sugary honeydew can create a nuisance when it attracts stinging insects to the leaves or a shady seating area beneath the tree.  The sticky coating itself can be a problem when it coats your windshield or pits the finish of your car.  In this article I will cover how you can reduce the problems with insecticides and by using my honeydew list (Table 1) to avoid planting trees that are prone to sucking insects near parked cars and picnic tables.

Unlike mammals, insects consume plants by either chewing or sucking- not both.  The waste products of dedicated chewers like bagworms and eastern tent caterpillars are in a dry pellet form that entomologists call frass.  The excrement left by insects who suck plant sap is a sugary liquid that is rich in protein that we call honeydew.  This liquid is excreted as clear droplets that build up on leaves and branches. In the absence of rain that washes off the honeydew, it can accumulate making the leaves appear shiny as if coated in a sugary glaze. In time, the honeydew can become contaminated with a black sooty mold giving the leaves and branches a black appearance. The sticky honeydew is an important source of nutrition for insects that pollinate plants, including butterflies, moths, bees, wasps and flies. 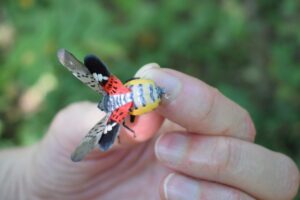 Figure 1. A large droplet of honeydew produced by this adult female spotted lanternfly is clearly visible at the end of its abdomen (Photo by E. Barnes). 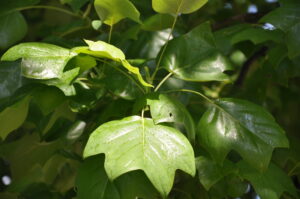 Common sucking insects that feed on trees and excrete include aphids, softscales, mealybugs and the newly introduced spotted lanternfly.  Each of these insects have tube like mouthparts that penetrate leaves or thin bark to feed on liquids moving through the plant circulatory system.  For this reason, you will often find aphids, scales and mealybugs feeding close to leaf veins. 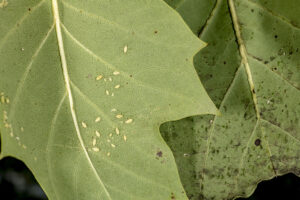 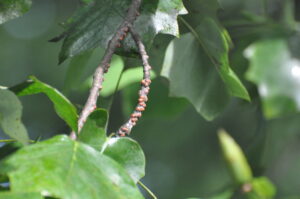 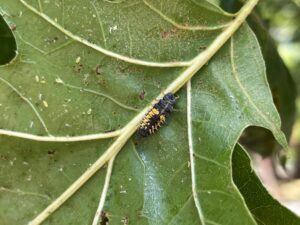 Figure 5. This black and orange lady beetle larva is attracted to the honeydew and feeds on aphids and scale insects. (Photo by C. Sadof)

Despite the many natural enemies like lady beetles, lacewings and parasitic wasps that attack honeydew producing insects, controls are often needed to reduce nuisance problems in the landscape.

Unfortunately, it is often difficult to control honeydew producing insects on trees with insecticides.  Foliar sprays like insecticidal soap, horticultural oil, or insect growth regulators like pyriproxyfen or buprofezin, can be quite effective, but it is often difficult to get effective spray coverage unless you hire a professional. Soil applied systemic insecticides (acephate, imidacloprid, dinotefuran) can be quite effective against aphids and soft scales, but they can kill pollinators attracted to the flowers. New research has shown that when applied to the soil, sucking insects can excrete enough insecticides in the honeydew insecticide to kill beneficial insects.

Probably the best way to avoid problems with honeydew producing insects is by not planting trees with a “High” likelihood of having these pests near parked cars, picnic tables or highly trafficked areas.  Use the following table of common street trees to help guide your tree selection. I have compiled this list based on informal notes I have taken on sucking insect problems I have encountered over the last 3 decades.  Select plants with a “Low” or very likelihood of being infested with honeydew producers when selecting trees near sensitive areas.  As I have yet to see any sucking insects in person or in the literature on a Kentucky coffee tree, I ranked it as “Very low”. Even though Callery pear has a low likelihood of problems with sucking insects, you should avoid planting it because it is an invasive plant that is choking our native forests.

In contrast, trees like honeylocust and several species of oaks are on the top of my list of most likely to have honeydew problems.  Although the soft scales attacking honeylocust rarely will kill a tree, they have caused enough of a nuisance in some communities to have residents remove their honeylocust trees.  Similarly, reports in the Indianapolis Star note persistent problems of honeydew rain in some communities with a rich oak urban forest.  This is caused by both a soft scale and an aphid. Problems with kermes scale on oaks have been documented in an earlier issue of the Purdue Landscape report.  Tuliptree poplar is another tree that dependably gets coated with honeydew by and aphid or soft scale somewhere in the state every year.  The last tree on the high list is the tree of heaven.  This is another invasive plant that is also attacked by the spotted lanternfly, the latest exotic pest to enter Indiana.  As you can see from Figure 1 it produces copious amounts of honeydew.

Trees ranked in the “Moderately High” category will occasionally become heavily infested with honeydew producers. These problems tend to be more common in parking lots or on city streets where warm temperatures and water stress make sucking insects grow more quickly and produce more offspring.  Trees ranked in the Moderate category less dependably infested with sucking insects, or the trees are too small to drip honeydew on to parked cars or picnic tables. 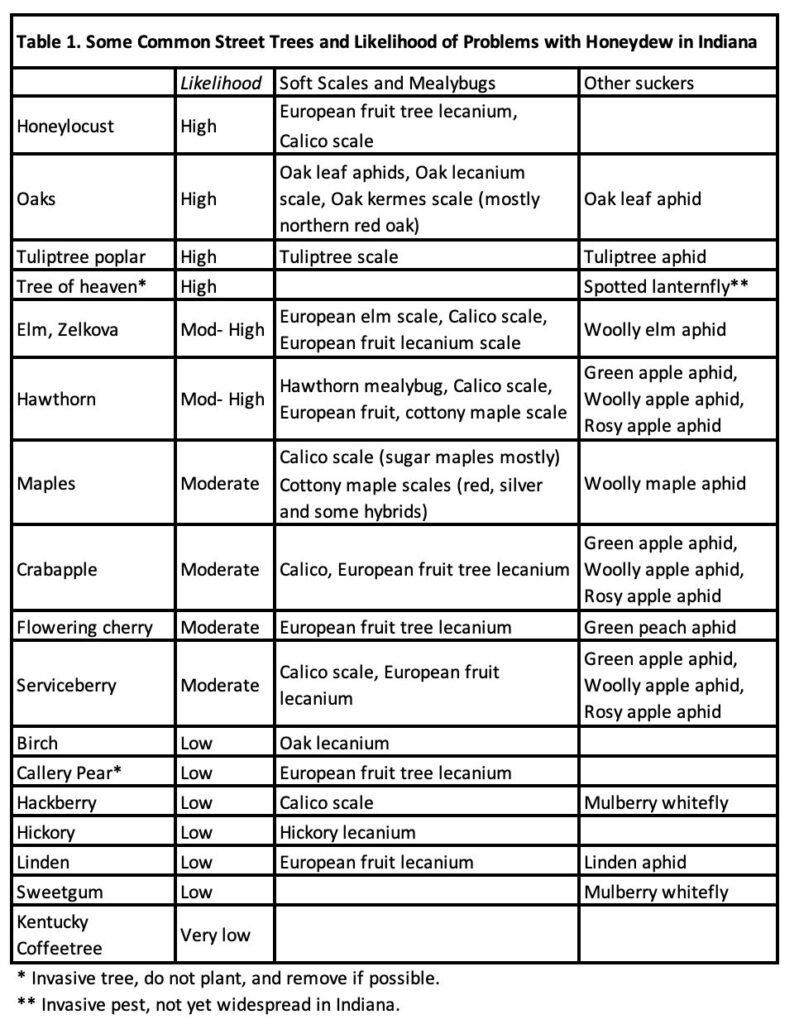 How to Fix Problems with Scale Insects – Purdue Landscape Report

Insecticide can be excreted in the honeydew of sucking insects