Scale insects are sucking insects that can encrust the limbs of trees and shrubs like barnacles on a boat. The higher temperatures and abundance of paved surfaces in cities can starve trees of water and help scales thrive and even escape from the natural enemies that keep them under control.  Heavy populations can kill plants.

Applying horticultural oil in the dormant season can be one of the most effective tools for getting rid of scales with a minimal impact on natural enemies.  Unfortunately, only 7 of the 22 kinds of scale insects listed on the soon to be released updates of the Purdue Shrub Doctor and Tree Doctor apps can be killed by dormant season applications of oil. These include some important scales, like Japanese maple scale, and euonymus scales, but not other important scales like oystershell scale and calico scale. Only armored scale insects that winter as adults or immatures beneath the waxy cover can be killed by oil in the dormant season.

What to use when dormant oil is not an option.

Armored scales.  These insects spend most of their lives covered with a waxy shell that cannot be penetrated by many insecticides.  The only times they are not under their shells are when they hatch from eggs and when the males fly to mate with females. Newly hatched scales are easily killed by insecticides. Products that can to kill scales with a minimal impact on the natural enemies include a summer rate of horticultural oil, or an insect growth regulator, like pyriproxifen or buprofizen. Timing of crawler hatch will vary with each species of armored scale. 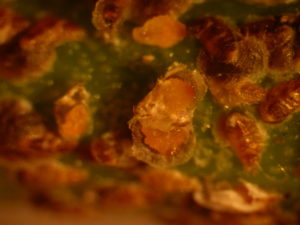 Euonymus scales can be killed by oil in the dormant season because they winter under scale covers. If you see a fleshy body beneath a waxy scale cover, the scale will probably be controlled with an application of oil (Photo by E. Rebek). 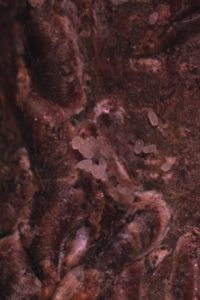 Oystershell scales cannot be killed by oil in the dormant season because they winter as eggs. If you flip over a scale and find eggs, it will not be controlled by oil. 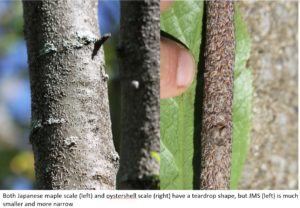 Oystershell scales that winter as eggs and are not controlled by oil, are much larger than Japanese maple scale that winters as an immature. 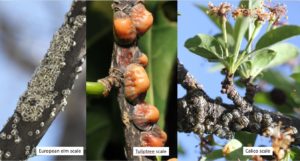 Soft scales, like calico and tuliptree scale, and felted scales like European elm scales are not covered with a waxy shell and insert their wire like mouths directly in the plant’s vascular tissue to sip from its circulatory system. As such, they produce copious amounts of liquid excrement called honeydew that can attract stinging insects. This sticky liquid becomes contaminated with black sooty mold that turns plants black and crusty. Heavy infestations can ruin the finish on a parked car, and make the turf below a sticky crinkly mess.  Oil does NOT kill these scale insects after they have settled down to feed and coat themselves with honeydew. Insecticidal soap does a better job of controlling these scales and insect growth regulators like pyriproxifen and buprofizen work even better.  The trick is to apply these products soon after the crawlers settle. Many of these scales like calico and European Elm scale hatch from eggs in late May and spend the summer on leaves and return to the trunks in the fall.  Other species like tuliptree scale will be more susceptible to insecticides when eggs hatch into the crawling stage during late summer.

How to know when crawlers are active and insecticides can be applied?

Monitor for periods of crawler activity by wrapping scale infested twigs or branches with a single band of black electrical tape so the sticky side faces out. Crawlers that emerge from scales are easy to see when they get stuck in the glue.