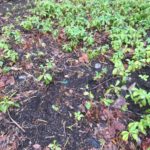 Volutella blight of pachysandra is often associated with plant stresses such as recent transplanting, exposure to bright sunlight, scale insects, and winter damage. Normally this disease does little damage to vigorous plants, thus providing good growing conditions is the most important control measure.

Unfortunately, a dense planting bed of pachysandra is the desired horticultural outcome, thus thinning the planting to allow better air circulation and leaf drying is not an aesthetically pleasing option. 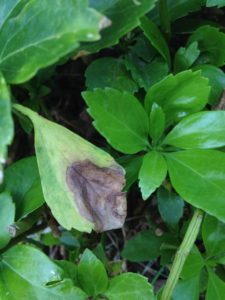 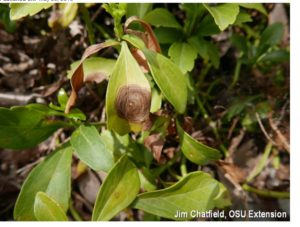 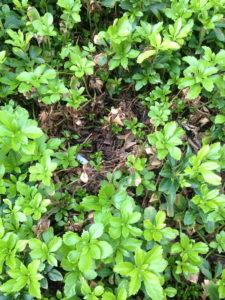 Fig 3a. Stem dieback due to girdling by the fungus (PPDL) 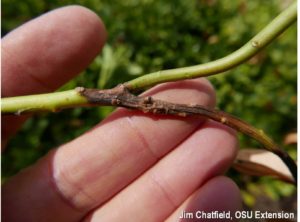 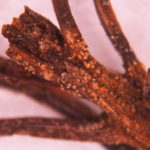 It has been reported that one approach that has worked over the years  in severely infected beds involves mowing infected plantings  to 1-2″ (with a bagger attached to catch the diseased tissue). Mowing improves air movement in dense plantings and reduces extended periods of moisture conducive to fungal infection. This simple cultural practice followed by the use of labeled fungicides, applied according to label directions, and applied several times at two week intervals is reported to protect newly emerging growth and reduce the amount of disease present.   It is also wise to avoid overhead irrigation in the evenings and to dig out and destroy severely diseased plants with basal stem cankers.

Note: label specifications change over the years thus be sure to check labels of products containing mancozeb, chlorothalonil, thiophanate-methyl, etc., to be sure  they may be applied. The label is the law!!!