I enjoy gardening and take pride in the variety of flowers my wife and I manage to squeeze into a few beds each Summer. This year an interesting zinnia caught my eye and ended up in our back-yard garden. After fending off rabbits early in the season a new threat emerged in July: bacterial spots on leaves and flowers (Fig. 1 & 2). This disease is caused by the bacterium Xanthomonas campestris pv. zinniae.  Zinnia also is susceptible to the fungus disease Alternaria leaf spot, which has a similar  appearance (Fig. 3), so I confirmed this was bacterial by checking for the presence of ooze using a microscope (Fig. 4) and by isolating the bacterium. 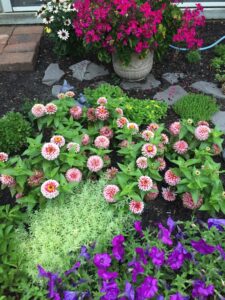 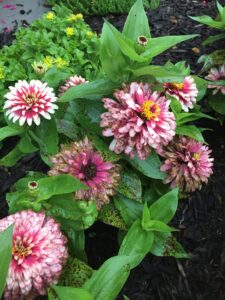 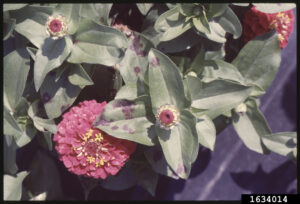 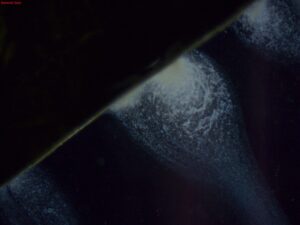 Fig 4. Bacteria oozing from the cut edge of a leaf shown under high magnification 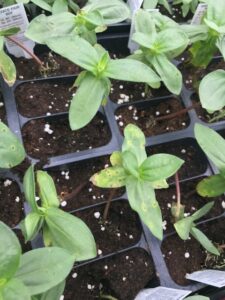 This specific pathogen only attacks zinnia so nearby plants were fine (except for the rabbits). The bacteria can survive on the surface of contaminated seeds or on leaves and may cause disease on seedlings (Fig. 5) or may show no symptoms until warmer weather. Although the plants appeared healthy when I bought them, I suspect they were grown from infested seed, because I had never used zinnia in that location before and all plants became uniformly infected at the same time. Spraying to try to control the problem was not practical for me because I didn’t catch it early enough and I’m too cheap to buy a new spray for so few plants (copper containing products can help reduce spread). These plants also developed powdery mildew later in the summer.

This fall I’ll pull them up and bag or bury them to get rid of the diseased material then start thumbing seed catalogs for something different to plant next year. Or maybe I’ll grow my own zinnias from seed and treat them with a dilute bleach solution (10% for 15 minutes) to kill any surface bacteria before planting.  I’ll also look for varieties that are reported to be resistant to powdery mildew. I’m sure the rabbits will still be a threat next year but hopefully bacterial leaf spot will not.