Now that we’ve reach midsummer, many people tending to small plants and bushes may notice small odd round grey objects attached to their plants that are made by potter wasps. Do you need to do anything about them? Do these nests help or harm your plants? And are they dangerous to people?

You are more likely to notice the nests of potter wasps than the adults. Potter wasp nests often look, like the name suggests, like a small grey pot (figure 1). They are rounded with a small opening that looks like the neck of a vase and are about the size of a cherry tomato. These wasps will attach their nests to many different surfaces but tend to prefer plant and bush stems. Potter wasp nests are often found hidden behind foliage in bushes.

Potter wasp adults come in a variety of colors but all of them look like small hornets. The most common species found in Indiana are mostly black with pale yellow bands around their abdomen (figure 2). 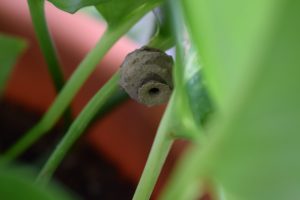 Figure 1. Close up of a potter wasp nest attached to the stem of a house plant. Photo by Elizabeth Barnes, Department of Entomology, Purdue University. 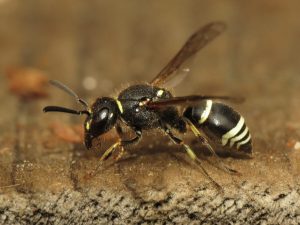 Figure 2. An adult potter wasp resting. This is just one of many different species of potter wasps. Photo by Fyn Kynd on flickr

How do they help plants?

Each “pot” that the wasps build is a tiny nursery for a single wasp. Adult potter wasps lay a single egg in each “pot” and then fill it with paralyzed caterpillars and small beetle larvae. When the wasp egg hatches it has all the food it needs to develop into an adult contained in the pot. Each wasp does a small part to keep down the number of caterpillars in the landscape which can reduce the amount of leaf damage on nearby plants.

Will they hurt me?

Probably not! Potter wasps don’t defend their nests and are generally not aggressive. Unless you actively try to bother them they will probably not bother you. If you need to remove one of their nests, you can simply pull it off the plant or object that it’s attached to. However, since they help with pest control, you may want to either leave the nest be or relocate it to a different section of the landscape.

Although the “pots” have a very distinct shape there are a few other things that could be confused with them at first glance. Mantis egg masses (ootheca) and some types of galls are both about the same size as potter wasp nests and also often grey. However, they both lack the vase neck-like opening that potter wasp nests have.

What should I do if I see one?

Let it be! Since these wasps rarely sting and help keep caterpillar populations down leave them alone so that they can continue to act as biocontrol agents. If you think you’ve seen a potter wasp or one of their nests and would like help identifying it, take a picture and either upload it to a community science project like iNaturalist or send a picture to the author of this article.