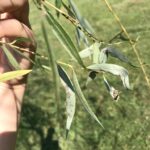 Willows (Salix spp.) can be beautiful additions to the landscape. These iconic trees can be found growing naturally in river bottoms, along ponds, rivers, and streams; all areas with consistently moist soil. In the landscape, where soil moisture is much more variable, willows can be stressed by drought, increasing damage from a number of canker diseases to which they are already very susceptible, including Botryosphaeria, Cytospora, and Phomopsis. In addition to these common fungal diseases, we’ve recently seen more cases of black canker disease, caused by the fungus Glomerella miyabeana.

Black canker is found on willows throughout the US and Europe. Symptoms often begin in early spring as leaf spotting (Figure 1) which expands to cover the leaf and petiole, causing the leaves to droop and wilt. Once reaching the petiole, the fungus will spread into the twig where it creates a black canker on the stem. Cankers may be limited or expand to create large black patches on the stems, depending on tree resistance and whether it is stressed (Figure 2, 3). In resistant plants, cankers may be restricted to smaller stems and twigs, but in species that are more susceptible, cankers can be found on larger stems and lead to stem girdling and branch dieback (Figure 4, 5). As the tree grows, the cankered tissue will not expand with the rest of the branches and a crack will form around the edge of the canker. 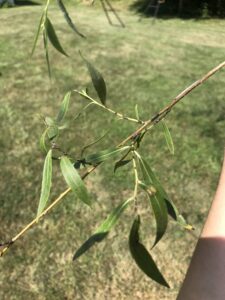 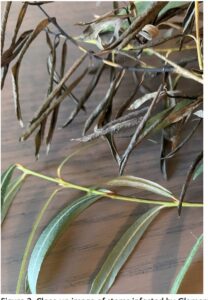 Figure 3: Close up image of stems infected by Glomerella miyabeana. Bottom limb is healthy, while the upper limb shows blighted leaves and the canker spreading into the stem. Image Credit: PPDL 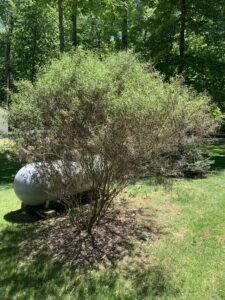 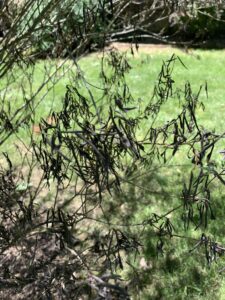 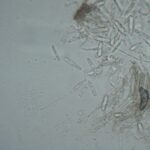 The infection begins during warm and humid weather in the early spring. The fungus produces asexual and sexual spores from last year’s cankers (Figure 6), which serve as the primary inoculum for the season. In mid-to-late summer the fungus sporulates on newly infected wood, producing pink clusters of asexual spores that are spread from within the tree or to other nearby trees by rain splash and driving wind, creating secondary infections and increasing disease severity.

Most canker diseases, including black canker, are more severe on stressed willow trees. This summer has produced periods of drought and high temperatures as discussed in Rosie Lerner’s article in the last issue: https://www.purduelandscapereport.org/article/dog-days-of-summer-barking-early-this-year/). Willows, in particular, are going to suffer more than other plants in these dry conditions and can increase the likelihood of developing a canker disease. We have been seeing more instances of black canker at the PPDL in the last two years than we have previously, possibly as a result of more frequent environmental stress. It is important to keep the plant as happy as possible to stave off infection by doing the following:

– Avoid the use of susceptible varieties and species (Table 1)

– Use of recommended pruning techniques

Management of black canker using fungicides has not been well researched, but pruning out affected dead and infected wood will remove the source of primary inoculum for the following year. Like other canker diseases, it is best to prune 6-8 or more inches below visible discoloration caused by the canker and remove or burn the affected tissue. 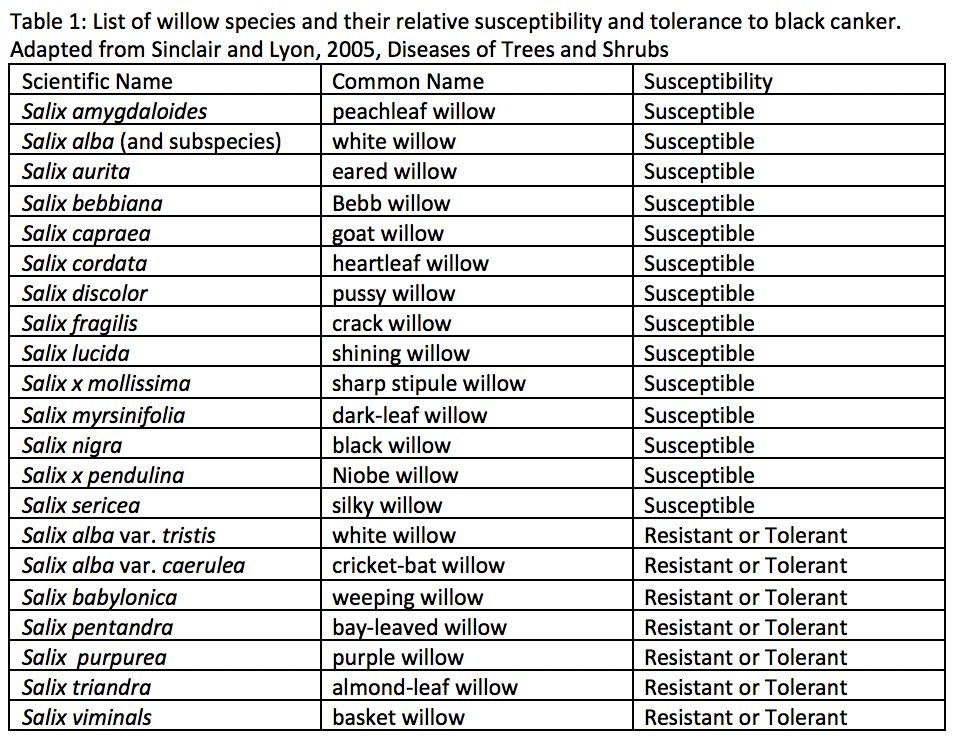