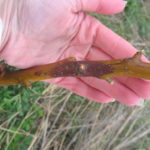 Figure 1. The branch stub serves as a wound that enables a pathogen, in this case, Nectria spp., to infect. Photo by Janna Beckerman.

Diseases that affect the twigs, branches, and the main trunk of a tree are referred to as cankers or blights. Cankers appear as a general sunken area of darkened tissue on the twigs or branches, often surrounding a branch stub (Fig. 1). Canker diseases can be a serious problem in the landscape when they are not properly managed, and even when they are. All woody plants can be infected by canker pathogens.

Many canker pathogens produce fruiting bodies, which contain sacs of spores (asci or conidia) that forcibly release the spores when the conditions are right. These pustules are easy to find on the surface of the canker (Figure 2). As the canker grows, the twig or branch may become girdled, causing the wilting and death of the leaves past the point of infection on the tree. On stone fruit, this can cause gummosis, too (Fig. 3). 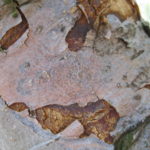 Figure 2. The erumpent pimples on the surface are where the perithecia are breaking through. Photo by Janna Beckerman. 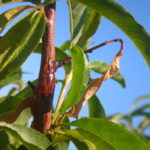 What causes cankers? Many different fungi (and a few bacteria!) cause cankers.  Some of the major players we’ll discuss are: Nectria twig blight (pathogen: Nectria cinnabarina), Nectria canker (Nectria galligena), anthracnose canker (many species of Gnomonia), Phomopsis canker (Diaporthe perniciosa and others), and nailhead canker (Biscogniauxia marginata). Cytospora canker, caused by many different species asexual forms of Valsa or Leucostoma, are also common opportunistic pathogens. All of these can be a problem for Indiana arborists.

Some bacteria cause cankers, too. Fire blight is the most important and common of these, and infects crabapples, flowering pear, hawthorn, mountain-ash and many other members of the Rose family. There are also other bacterial diseases, such as bacterial canker of flowering cherry and bacterial blight, which infects a very broad range of landscape plants. 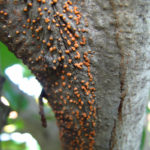 Figure 4. The coral fungus, Nectria spp., gets itsname from the pink fruiting bodies that break through the bark. Photo by Janna Beckerman.

Nectria twig blight is often mistaken for fire blight because of the witlting that occurs due to the girdling of the twig by small cankers.  However, unlike fir blight, there is no blighting of the blossoms, and the shoots do not die from the tip.  Bright pink cushions and fungi called sporodochia can be found in the dead tissue of the canker (Fig. 4).  This disease appears on trees that appear to be otherwise healthy. Nectria canker is usually first found at the node, and appears as a darkened elliptical, sunken area.  Bright red to orange perithecia are often observed on the canker in the winter.  Nectria pathogens are commonly infecting beech, mountain-ash, crabapple and honeylocust.

Anthracnose canker first appears as small, circular red or purple spots when moist. As the canker enlarges, the spots become elliptical, sunken orange to brown areas. Cracks will eventually develop between the healthy and infected tissue (Fig. 5), and cream-colored acervuli, or fungus cushions, will appear. There are many different species of anthracnose and hosts, but some common canker pathogens infect sycamores, crabapples and dogwoods. 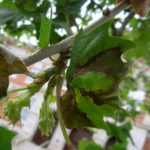 Figure 5. Anthracnose of sycamore. The split to the left of the infected leaf is most likely the beginnings of a canker. Photo by Janna Beckerman. 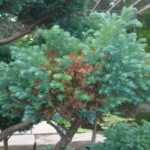 Phomopsis canker and Monochaetia twig canker are generally secondary and only infect dead or dying tissue. This often happens after herbicide injury or winter injury, however, we have been seeing an uptick in Phomopsis of spruce(Fig. 6). If you think about it, anything with a species epithet of ‘perniciosa’ is probably bad news that will not be easily managed. This problem is no different.

Nailhead canker, also called blister canker, tends to flare up after drought years. This opportunistic pathogen attacks stressed crabapples, serviceberries, hawthorns and pears, causing dieback or even death (Fig. 7a and b). The ‘nailheads’ are composed of perithecia, each filled with sac of ascospores (Fig. 8). 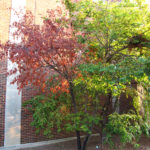 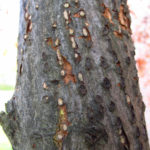 Figure 7b. Closeup of the ‘nailhead’ canker. Photos by Janna Beckerman 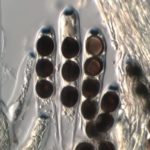 Figure 8. Asci and ascospores of the naihead pathogen. Photo by Paul Cannon.

Canker diseases generally survive the winter in the canker tissue as mycelium and/or conidia. The pathogens spread by conidia and/or ascospores that are dispersed by either wind or water. Most canker-causing fungi infect through a wound such as a pruning cut, a leaf scar, herbicide drift injury, or other damaged tissue. The one exception is the anthracnose pathogen which penetrates through the bark directly. Moist weather tends to favor disease development, and disease development can occur at a wide range of temperatures. New cankers tend to form in either the fall or spring, and this is also when most canker diseases are actively producing inoculum.

Although there are many different pathogens that cause canker, management strategies are quite similar for all of them. The most effective tool in managing canker diseases is the removal of cankered tissue from the landscape. Infected branches should be pruned and then removed from the landscape/nursery or burned. Be sure to prune back at least 15” to remove the fungus completely. By removing infected plant material, the inoculum level is reduced, and the chances for new infection to occur are also reduced. As the pathogens that cause these diseases generally enter through a wound, care should be taken in pruning, and mechanical damage from machinery should be minimized. You can’t treat trees with a fungicide after infection. The best you can do is prevent infection from occurring by irrigating during drought periods, careful use of all herbicides, proper fertilization (not after July 1 to allow trees to harden off before winter), and proper pruning to minimize branch stubs. Most fungicides used to control other diseases (chlorothalonil and the 7-11 fungicides like Pageant, Orkestra, or Broadform) are effective in preventing these diseases, particularly after a wind or hail event. However, fungicide use should be reserved for blocks with a history of problems with the diseases, and even then, underlying problems need to be corrected.