Dead leaves covering trees (image 1) or on the ground beneath them (image 2) in July would normally be a worrying sign for tree health, but this year much of the damage can be blamed on 17-year cicadas. This damage is unlikely to cause serious trouble for healthy, large trees and management is relatively simple. The choice to prune or not to prune comes down to cost, aesthetics, and concern for the next generation of cicadas.

Image 1. Cicada damage is typically restricted to the small, outer twigs. Trees may be completely covered by cicadas or have a few isolated dead twigs. All trees in these images are expected to suffer no serious long term effects from this damage. Images by Clifford Sadof of Purdue University and Pennsylvania Department of Conservation and Natural Resources – Forestry. 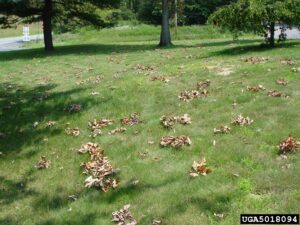 Image 2. The dead twigs killed by cicada egg laying may break off the tree and litter the ground underneath. Image by Pennsylvania Department of Conservation and Natural Resources – Forestry. 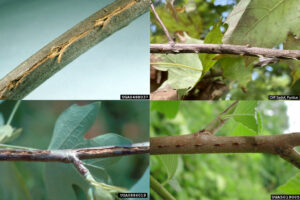 Image 3. Cicada egg laying damage varies between tree species, but is consistently in a straight, length-wise line along the branch. Note that all four examples also have signs of either puncture marks, cracks in the bark, or some combination of the two. Images by John Ghent, Clifford Sadof of Purdue University, Tim Tigner of Virginia Department of Forestry, and Pennsylvania Department of Conservation and Natural Resources – Forestry.

Cicada damage is similar to a light pruning and should not be an issue for healthy, mature trees. Cicadas damage trees when they lay their eggs in small twigs (3/16 to 1/2 inch in diameter) on deciduous trees and shrubs. They have a long, thin body part called an ovipositor that resembles a sewing needle that they stab into plants to lay their eggs. This action creates small holes and cracks in the bark (image 3). If enough cicadas lay their eggs in a twig, it can damage the bark enough to kill the twig (image 1).

Recognizing Cicada Damage
The degree of cicada damage depends on insect density and the number of trees in the area. To determine if a tree or bush has been damaged by cicadas, ask the following questions:

1.  Were there 17-year cicadas within 50 meters (~164 ft) of the tree this year? Cicadas do not travel very far. If there weren’t noticeable numbers of 17-year cicadas nearby the damage was likely caused by something else.
2.  Is the damage on a deciduous tree or bush? Cicadas rarely lay their eggs on evergreen trees and herbaceous plants. Damage on these types of plants is likely caused by something other than the cicadas.
3.  What size of branches and twigs are damaged? Cicadas show a strong preference for small twigs (3/16 to 1/2 inch in diameter). As a result, damaged trees may appear as though their outer layer of leaves is dead while the inner leaves remain healthy (image 2). If larger branches are dead, the damage was probably not caused by cicadas.
4.  Does the bark have typical egg laying damage? If you can reach the damaged twigs, look for a row of puncture wounds often connected by cracks length-wise along the branch. Their appearance may vary between tree species (image 3), but they will almost always be length-wise.

What to Do
Cicada damage should not be an issue for large, healthy trees but it is possible that the egg laying wound might act as an entry point for a pathogen or that some other issue might be mistaken for cicada damage. Therefore, regardless of how you choose to proceed we suggest keeping an eye on your tree and watching for signs of further issues (See our article on checking your tree for basic signs and symptoms of ill health).

Once you have confirmed that the tree has been injured by cicadas, there are several options for dealing with it depending on what your goals are.

•  If you want to remove the dead twigs or want to decrease the number of cicadas in the future, you should prune the twigs within the next 3-4 weeks and move the trimmings to another site. Cicada eggs take from 4-6 weeks to hatch. If twigs are not trimmed before that time, many of the cicadas may hatch and drop into the soil. Although some of the cicada eggs are likely to be killed in the trimming process, many will survive. If the trimmings are left under your trees, the cicadas will burrow into the soil and begin the cycle again.
•  If you want to remove the dead twigs but want to protect the cicadas, you should delay pruning until at least October. Although many cicada eggs will survive the trimming process, the best way to ensure their safety is to leave them on the tree until they hatch (~4-6 weeks). We suggest that you wait until fall to prune to avoid a late flush of leaves which could stress your trees or bushes.
•  If you are not concerned about the dead twigs and want to protect the cicadas, you do not need to prune. The dead twigs themselves are unlikely to cause a serious issue for your trees or bushes.