We receive a large number of spruce samples each year at the PPDL, with the vast majority being from Colorado blue spruce with needlecast. Many others show lower needle yellowing, which could be associated with nutrient deficiency or root stress. Figure 1 and 2. 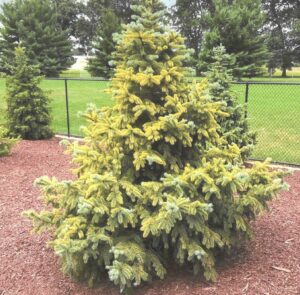 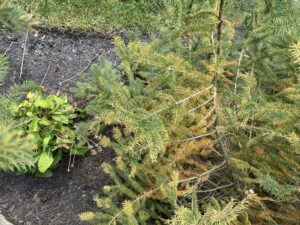 Figure 2: A young spruce tree under the effects of transplant and root stress.

However we are receiving an increasing number of Norway spruce samples with small branch dieback from the tips. This tip dieback symptom can have many causes: cold injury, root damage manifesting in branch dieback, Diplodia tip blight (caused by Diplodia sapinea, the same pathogen that causes tip blight in pine), and Cytospora canker. Phomopsis, another fungal pathogen which causes tip blight on spruce in nursery situations has been observed in greater frequency since 2012 by plant diagnostic labs in the North Central region causing cankers and tip dieback in more mature spruce trees in the landscape. Figure 3 and 4. 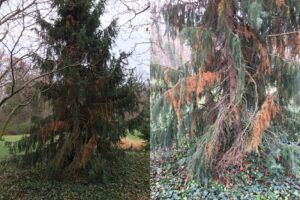 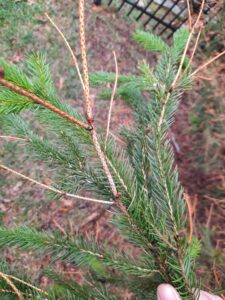 The disease begins in the lower canopy and moves upward, but in some cases it progresses quickly, causing dieback through a large portion of the tree, Figure 5. Besides needle death and drop, there are virtually no other external symptoms to indicate where the original infection took place. Occasionally you may find resin building on the outside of a canker, Figure 6. Cutting into the thin bark will show the brown discolored tissue where the canker is developing, Figure 7. Cankers are often located in between two areas of healthy tissue. This can lead to older needle loss similar to needlecast diseases, but leaving terminal buds alive. However, once the pathogen spreads and girdles the branch, the rest of the branch will begin to die out to the tip. 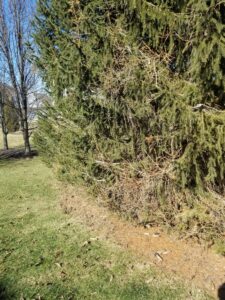 Figure 5: Symptoms of Phomopsis dieback begin in the lower canopy initially before spreading upward over time. 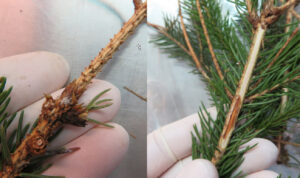 Figure 6: A small amount of resin present at the location at the point of infection.

Figure 7: There are few symptoms on the exterior of the branch, aside from some resin, that show the presence of a canker.

Figure 8: Phomopsis pycnidia on different hosts with spores oozing out in tendrils during humid weather.

Under humid conditions the fungus produces spore bearing structures (pycnidia) in the cankered tissue, erupting from through the thin bark. These structures are black and, in wet weather may produce yellow to tan colored tendrils of spores (cirrhi) which are visible with a hand lens, Figure 8. When dry, they retain their tendril-like shape, but when moist, they loosen up and are easily spread by rain.

The pathogen appears to infect younger tissue readily, which is where we see it most commonly, but will also infect wounded older tissue as well, leading to cankers on larger limbs. Pruning out infected branches will reduce the potential inoculum for future seasons. We are not sure why this disease is becoming a more prevalent issue in the landscape, but trees being exposed to more environmental extremes may be a contributing factor.  This emerging problem is just one more reason to keep your trees happy if they want them to remain aesthetically pleasing in the landscape.