The dead lower branches in these Austrian pines (Fig. 1) are due to Diplodia (= Sphaeropsis) tip blight.  The causal fungus infects newly elongating shoots, in late spring, resulting in stunting and death of the new growth (Fig. 2).  Black spore-bearing structures of the causal fungus are formed at the base of the stunted brown needles and on infected cones (Figs 3 and 4).  Austrian pines are very susceptible to the disease, and infected trees often lose ornamental value as twigs are killed year after year.  For more information on this disease, refer to BP-24-W,  which can be found at: https://www.purduelandscapereport.org/resource/diplodia-tip-blight-of-two-needle-pines/ 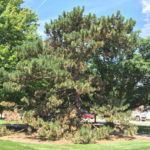 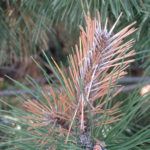 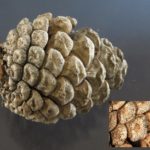 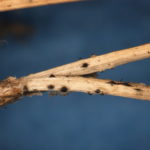