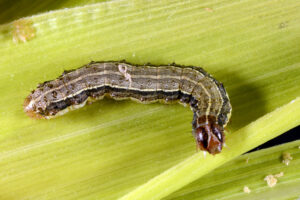 The entire Midwest just experienced one the worst fall armyworm (Fig. 1) outbreaks in decades, but for turfgrass professionals and enthusiasts, it’s not over yet. These seasonal, but sporadic insects made their appearance at the end of August, decimating lawns and other managed turfgrass. But, now that the damage is done, our focus shifts from crisis to recovery, with an eye open to the next generation.

Fall armyworms, as their name implies, usually show up in the late summer and fall in this part of the country. These insects remain in subtropical climates for most of the year, but hurricanes and tropical storms that sweep northward during hurricane season can carry enormous numbers of adults into the interior of the continent, sometimes raining fall armyworms over the entire Midwest and Northeast. Once they fall out of the sky, those adult lay eggs in masses on vertical objects including the sides of structures and even the flags marking golf holes (Fig. 2). When enough egg masses are laid in close proximity to one another, the resulting larvae can be so numerous that they eventually overwhelm surrounding turf, chewing it to the ground (Fig. 3). The larvae that consumed your turf over the last few weeks have now pupated (Fig. 4) and are beginning to emerge as adults, so our efforts should shift accordingly. 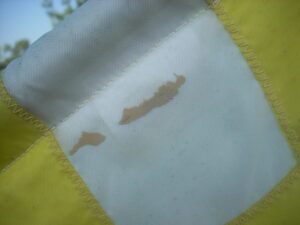 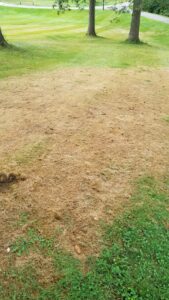 Figure 3. A stand of turfgrass damaged by fall armyworm larvae at the end of August in West Lafayette, IN (Jim Scott Photo). 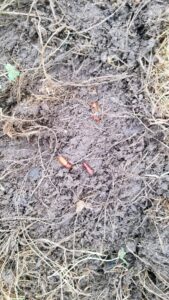 Figure 4. Fall armyworm pupae found at the soil surface in a stand of turfgrass damaged by the larvae (Jim Scott Photo).

Giving turfgrass the best opportunity to recover should be the top priority. While soil temperatures remain high, disturbing plant crowns should be avoided, so raking out dead material, core cultivating and slit seeding should be put on hold if possible. Instead, consider  irrigating the turf if the soil is dry. Irrigation can help reduce soil temperatures and stimulate plant re-growth. If the turf is not fertilized, a very light fertilization (<0.5 lbs. of N per 1000 ft2) may be in order, but keep in mind that well-maintained turf will generally not require additional nitrogen. If the turf isn’t growing, don’t mow it. In other words, do everything you can to protect the plant crowns as these will produce the new tillers and leaves that mark recovery.

Keep an eye out for the next generation of fall armyworm larvae. Almost all of the previous larvae have pupated and a few adults have begun to emerge. The adults resulting from the previous larval generation will soon busy themselves mating and laying eggs that will produce another, potentially destructive, larval generation. It’s still early in September and there is likely plenty of warm weather left this season to move larval development along. However, the next generation is not likely to reinfest the same stands of turf. Adults will disperse and find “greener pastures” that are more suitable for their offspring. That means scouting for egg clusters and soap flushing for larvae are the best ways to identify potential infestations before they cause serious damage. If we get lucky, temperatures will moderate and put the brakes on  fall armyworm development, but I wouldn’t bet on it. The last half of September and first half of October could be interesting.

Fall armyworms are easy to manage and there are a number of insecticide active ingredients that will keep them in check (Table 1). Liquid applications are almost always preferable to granules since liquids provide better coverage and work more quickly. Granules also require rainfall or irrigation to release the active ingredient. Mowing just prior to application can increase penetration of the insecticide through the canopy and into the spaces where fall armyworms are active and feeding. 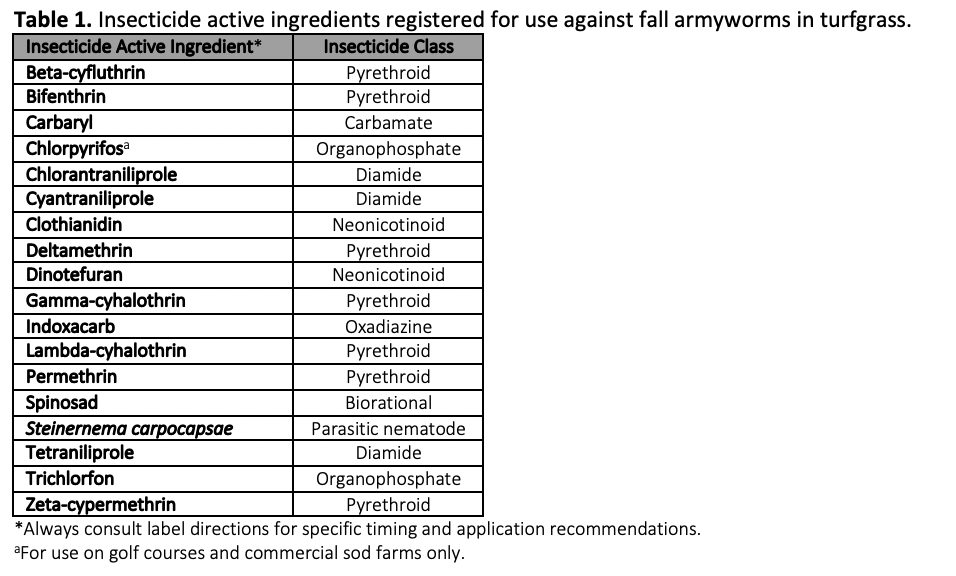 That’s it ¾ focus on turfgrass recovery and regrowth, and be alert to egg masses and developing larval infestations. If another generation of fall armyworms unfolds, its potential impact on turfgrass winter-hardiness and spring green-up could be a significant concern.