Contorted filbert is an ornamental cultivar of European Filbert, (Corylus avellana ‘Contorta’), grown for its twisted, gnarly stems. The plant is also sold under the name Harry Lauder’s Walking Stick. While it’s unique architecture can be impressive, it’s highly susceptible to a fungal canker that can cause extensive damage to the tree. Eastern filbert blight is caused by the fungus Anisogramma anomala and occurs in most regions where filbert is grown. Spores of the fungus are spread by wind to new trees and by splashing water to new branches within an infected tree. Dying branches signal the presence of the disease but the contorted nature of the growth may mask the distortions, swellings and cracked bark caused by the cankers. If cankers are not pruned out quickly, they will continue to spread down the branches, eventually reaching the main trunk and killing the tree. This disease is difficult to control because spraying fungicides would only work if used every week throughout the growing season, making such treatments impractical. Pruning to remove the cankers requires cutting several inches below any sign of discolored wood and often requires removal of so many branches that the ornamental value of the tree is lost. Individual trees in the landscape may escape infection for many years if other filbert trees are sufficiently distant, however social distancing for this pathogen is measured in miles rather than feet, so most contorted filbert do eventually succumb. Infection takes place several months before the tree begins to show any symptoms so it’s easy to miss existing first year infections. The dieback may continue to progress as those young infections begin to expand and create cankers. There are several resistant varieties of nut-bearing filberts.  The Red Dragon contorted filbert was developed at Oregon State University and is reported to be resistant to eastern filbert blight.

Our native hazelnut, Corylus americana, can be infected by the fungus; but is considered a minor disease on this host, because it produces small cankers that can be more easily pruned out. 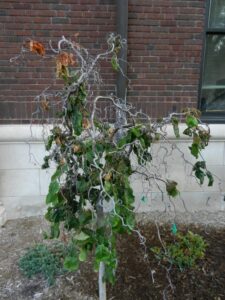 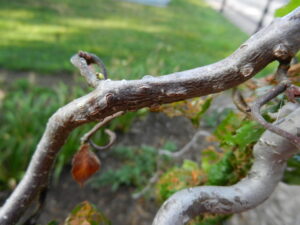 Figure 2: This branch shows swellings and bark cracks, symptoms that often point to a fungal disease. 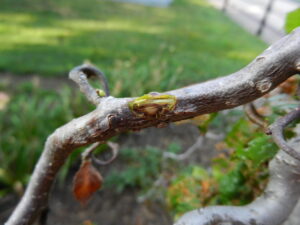 Figure 3: The same branch with the bark peeled away shows the early stages of a fungal canker just below. 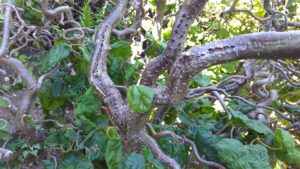 Figure 4: Multiple larger branches on this tree were infected, as shown by the raised black fruiting bodies of the fungus. 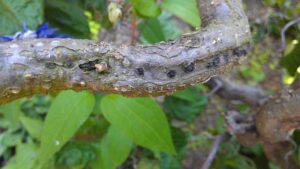 Figure 5: A closer view of the black fungal fruiting bodies of Anisogramma anomala. 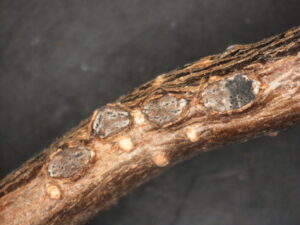