Nothing heralds summer like the hum of Japanese beetles ravenously descending on a flower garden.  Cool weather this spring has slowed emergence of adults from the soil.  Heavy spring rains early followed by relatively drier weather in late June, may have trapped adult Japanese beetles under a crusty layer of hardened soil.  Due to their large numbers in many parts of Indiana last year, they are very likely just waiting for a good rain to soften the surface, so they can dig themselves into the light of day and on to your flowers. So, if we get a little more rain by the time this article comes out, we are likely to be awash in adult beetles. 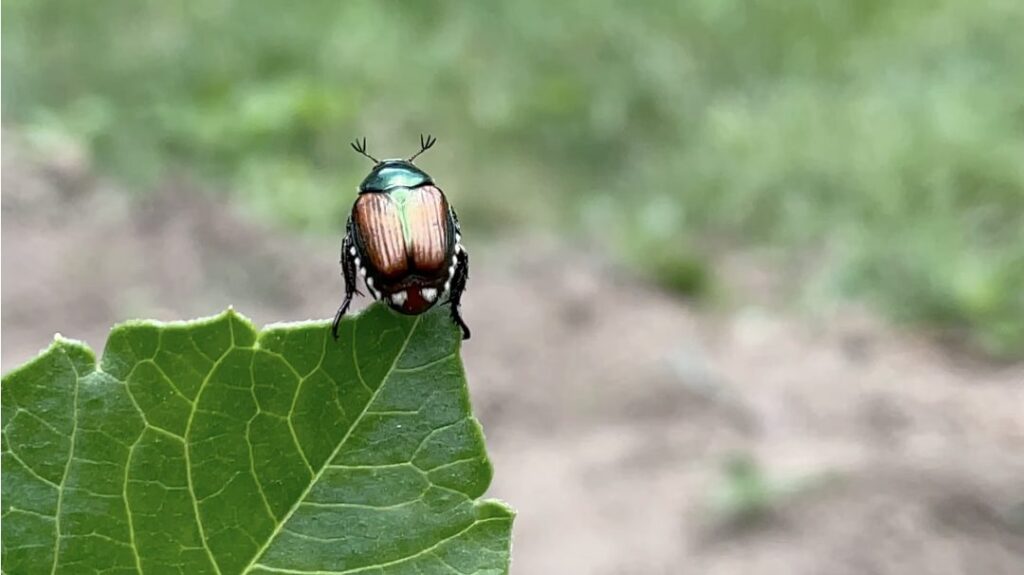 Early in the year, isolated Japanese beetles are often found on plants. This beetle is stretching its finger-like antenna after landing on a dahlia leaf as it tries to figure out if it is tasty enough to eat. CLICK IMAGE FOR MOVIE CLIP OF BEETLE 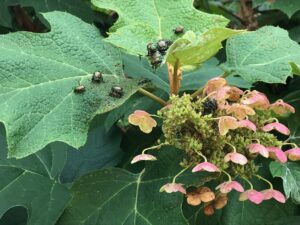 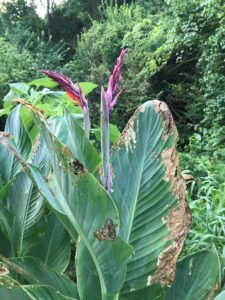 Although killing grubs will reduce the number of beetles, the small size of lawns and the long flight range of makes it unlikely for your grub control program to reduce defoliation.  In experiments conducted in my lab over 20 years ago, we found adult beetles can easily fly a kilometer (0.66 miles) in a single day.  With adults living for several weeks, it is easy to image beetles traveling long distances from untreated lawns to plants on your property.

Life cycle of Japanese beetles: As the weather warms in the spring larvae (aka white grubs) move closer to the surface and begin feeding on turf roots.  In May they enter a pupal stage and stop feeding.  In June they typically emerge from the soil as adults.  Adults fly in summer when they feed on flowers and leaves.   In late July and early August adults lay eggs into the turfgrass.  White grubs hatch from eggs and feed on the roots until frost when the larvae begin dig deeper into the soil to avoid killing temperatures.

What to do about Japanese beetles? There are quite a few insecticides that can be used to protect plants against Japanese beetle adults. It can be difficult to kill the beetles without harming pollinators that visit flowers because most insecticides that kill beetles will also kill pollinators. One of the best ways to protect pollinators and your flowers is reduce the number of times you spray your flowers. Rather than apply an insecticide when you see the first beetle, wait until you see some beetles starting to feed. Then wait until more enough beetles arrive before you apply your second spray. This should reduce the number sprays during the spray period.

For a list of products available to control Japanese beetles see: