So, what do trees do in the winter? Do they freeze up like unprotected water pipes? Or burst when it gets below freezing? Yes, the below-ground parts of a tree are kept insulated by mulch, soil and a layer of snow, and that is important to survival, but the exposed parts of a tree are not protected. 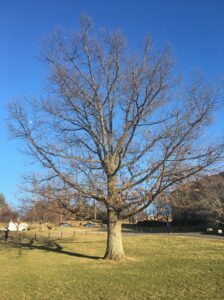 Surviving winter actually begins in fall when leaves turn color and drop to the ground.

Deciduous trees like maples and oaks, have a lot of water inside their trunks and branches and is the single most important substance for tree life, comprising nearly 80% of tree material. Although there is a little less inside the tree during the winter, if the temperature drops low enough, the water in even the most cold-hardy tree will freeze. Broadleaf, deciduous trees lose their leaves in the winter to reduce water loss inside the trunk and branches. Most needle-leaved trees, known as conifers, which include pines and spruce retain needles year-round – with exceptions of some deciduous evergreens such as larch and bald cypress– only losing older, or damaged needles. Needles are better at retaining water than broadleaves due to their small surface area and waxy outer coating limiting water loss to transpiration, the evaporation of water from leaves. A hard freeze or poorly timed drop in temperatures can be devastating to living tree cells since ice crystals can shred cell membranes, leading to dead leaves, branches, and even whole trees. Most trees live through the winter despite prolonged exposure to brutally cold air and wind and snow, with special strategies and planning.

Dormancy of trees can be divided arbitrarily into three phases: early rest, winter rest, and after-rest. Each of these phases is marked by a distinct set of physiological processes. The transition between the three phases is gradual and there are many metabolic and developmental processes going on in the buds and twigs. A tree begins its preparations in late summer as day length shortens to survive winter temperatures. Cold acclimation occurs gradually and fall color is a sign that the process is in place and pre-dormancy is beginning. 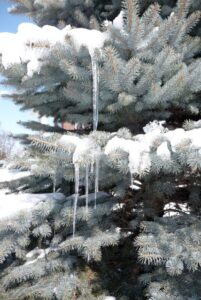 Evergreens are a little different and have a special waxy covering to reduce water loss during the winter.

When the tree enters the winter rest stage, research suggests three basic ways in which a tree prevents freezing. One is to change their membranes, so the membranes become more pliable; this allows water to migrate out of the cells and into the spaces between the cells. The relocated water exerts pressure against the cell walls, but this pressure is offset as cells shrink and occupy less space.

The second way a tree helps prevent freezing is to thicken the fluids within the cells. When days begin to get shorter, trees convert starch to sugars, which act as a natural antifreeze for the plant. The cellular fluid within the living cells becomes concentrated with natural sugars, which lowers the freezing point inside the cells, while the water between the cells is allowed to freeze. Because the cell membranes are more pliable in winter, they’re squeezed but not punctured by the expanding ice crystals.

The third mechanism involves what has been described as a “glass phase,” where the liquid cell contents become so viscous that they appear to be solid, a kind of “molecular suspended animation” and mimic the way silica remains liquid as it is supercooled into glass. This mechanism is triggered by the progressive cellular dehydration that results from the first two mechanisms and allows the supercooled contents of the tree’s cells to avoid crystallizing.

All three cellular mechanisms are intended to keep living cells from freezing. That’s the key for the tree; don’t allow living cells to freeze. 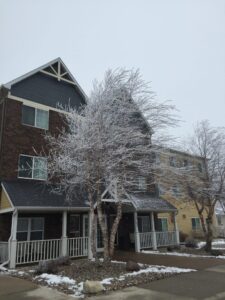 A tree doesn’t have to keep all of its cells from freezing, just the living ones which are primarily the phloem cells. This is significant, since much of a tree’s living trunk is made up of cells that are dead, such as xylem cells. These dead cells can and do freeze, but even the lowest temperature doesn’t have an adverse effect. While a majority of a tree’s above-ground cells do indeed freeze regularly when exposed to subfreezing temperatures, the living cells remain unfrozen and active on a reduced level. There are living cells in the trunk that remain unfrozen even though they are right next to – and at the same temperature as – dead cells that are frozen solid!

This seemingly mystical combination of pliable membranes, natural antifreeze, and glasslike supercooling, with frost on the outside and viscous dehydration on the inside, helps trees avoid freezing injury to living cells. Trees are the largest, oldest living organism on our planet and don’t grow older and larger without having very specific strategies for survival.

However, sometimes, trees aren’t able to withstand extreme conditions, especially if nature provides an unusual change.  While trees have evolved amazing strategies for withstanding the winter cold, sometimes it gets so cold that trees can explode. During spells of extreme cold or especially when trees haven’t had time to acclimate before the cold arrives, the life-sustaining sap inside a tree can begin to freeze. Sap contains water so it expands when frozen, putting pressure on the bark, which can break and create an explosion, so to speak.

Proper winter care is critical to protect your trees with mulch and water to help trees make it through the winter months. For more information on winter tree care, check out this publication.