This spring the PPDL received several samples, calls and emails related to dying weeping cherry trees (Fig. 1, 2, 3). Reports of this phenomenon came from as far away as Missouri. Ornamental cherry trees (and related Prunus spp.) are susceptible to multiple problems, including southwest injury (Fig. 4) Botryosphaeria dieback/canker (Fig. 5), bacterial canker and borers that attack the main trunk (Fig. 6). However, the main cause for so many weeping cherry trees dying this spring seems to be linked to environmental conditions in 2019 and 2020. 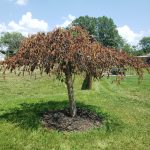 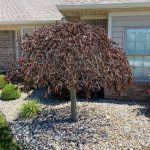 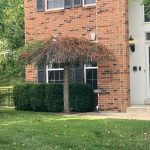 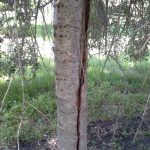 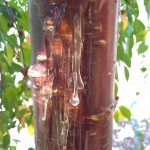 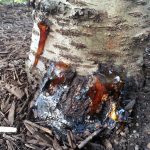 – Extreme weather patterns last year may have caused many trees to enter winter dormancy in a stressed state. In 2019 we had prolonged spring rains that caused soil saturation and root damage to many plants; followed by extended dry summer weather. Trees that had a reduced root capacity were unable to take up enough water and may have been especially stressed.  See this article for further discussion:​https://www.purduelandscapereport.org/article/feast-or-famine-landscape-plants-are-struggling-due-to-precipitation-extremes

-Temperatures in northern Indiana in Fall 2019 were moderate, with day temperatures generally staying in the 40s or 50s until November 10-13, when we had sudden lows of 19F and 5F and highs of 19F and 29F. Several cities had a record lows during this period. This very rapid drop to temperatures, normally experienced in January or February, caused freeze damage to some trees that were not yet fully dormant.

– Then in spring 2020 we had late spring freezes/frost events that caused further damage to many trees and shrubs. Some shade trees were completely defoliated after having developed fully expanded buds or leaves. It took a long time for them to recover. It’s likely that cherry trees were similarly affected. Although many trees recover well following frost events, those already under stress may struggle to push out a second set of leaves.

All these problems taken together likely made preexisting conditions like diseases or insect damage worse. Weakened trees never leafed out in the spring while others pushed out a flush of spring growth then suddenly died as the weather warmed. Keep in mind that when a weeping cherry dies it may produce side shoots from the main trunk. These will be of a standard cherry tree, not the weeping form and if allowed to grow they will produce a lop-sided tree that will not look like the original.

It is not usually possible to determine the precise reasons why a tree has died but we can often identify disease and/or insect problems affecting living trees with a set of good photos of the tree submitted through our online upload site, and the right kind of physical samples.