Tubakia leaf spot, caused by the fungus Tubakia, is the disease we find more commonly on oak than any other. Throughout the world, there are 11 species of Tubakia known to infect oak, with Tubakia dryina (previously known as Actinopelte dryina) being the most commonly encountered species in our landscapes. Apple, ash, black gum, chestnut, elm, maple, and redbud are all reported as hosts of Tubakia species, but oaks are the most frequently and severely affected. Among the oaks, the red oak group, specifically red, pin, and black oaks, are reported to be more susceptible to infection compared to those in the white oak group. 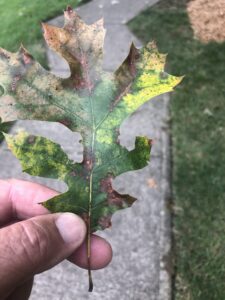 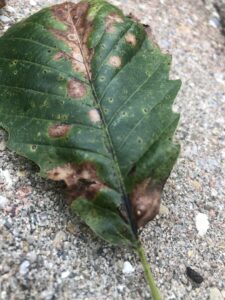 Leaf spots appear in mid to late summer (July –August) as small circular to irregular tan, red-brown, to dark brown spots (Figure 1, 2) that expand to approximately the size of a dime overtime, but can coalesce, forming large areas of necrotic tissue (Figure 3) . When a spot reaches a leaf vein it expands very quickly, causing a necrotic streak along the vein, and can cause blighting of most of the leaf (Figure 4, 5). Trees under stress from other causes will frequently exhibit more severe leaf spotting compared to healthier trees. Premature defoliation can occur in these situations. 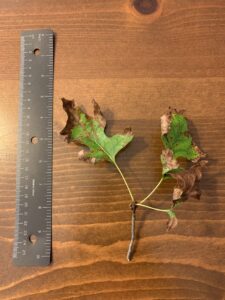 Figure 3: Marginal blighting due to coalescing spots and veinal necrosis. 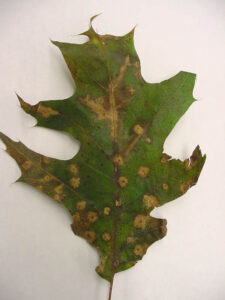 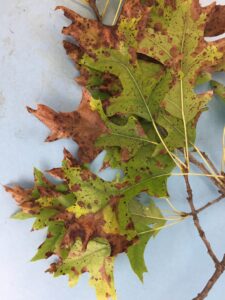 The pathogen produces conidia within shield shaped structures called pycniothyria (Figure 6) which can be found on both the top or bottom surface of the leaf and along veins (Figure 7). These structures are very small and can only be seen with a 40x or stronger hand lens. The fungus overwinters on fallen leaves and on dead stems which act as the source of inoculum for the next year. During early spring, spores are spread by wind and water splash dispersal (rain) to healthy new foliage. However, it takes time for symptoms to develop throughout the season, depending on tree stress and environmental conditions (warm wet weather favors spread). 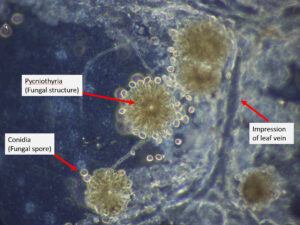 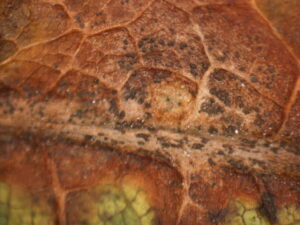 Tubakia leaf spot is largely a cosmetic problem on oaks and will not require any major management efforts. Fungicides are not recommended to manage this disease since it causes negligible damage. In fall, removal of fallen leaves will reduce the overall inoculum for the next season. If a tree is developing severe leaf spotting or is dropping leaves early in the fall, it should not incite panic since the damage is minimal and will not reduce plant vigor on its own. When you do see increased disease severity it generally means that there are some other stressors affecting the tree, such as drought stress, high pH, nutrient deficiency, or other abiotic factors. Tubakia can sometimes help clue you in on other problems that the tree might be experiencing. It is important to do what you can to improve or maintain plant vigor to mitigate stress to the tree including fertilizing prior to July and irrigating during dry spells. Younger trees and those that are newly transplanted are more likely to be infected by Tubakia compared to mature trees, so more precautions should be taken to mitigate stress. 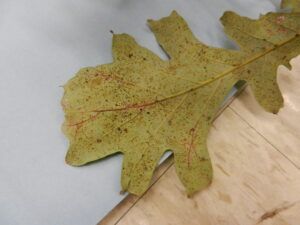 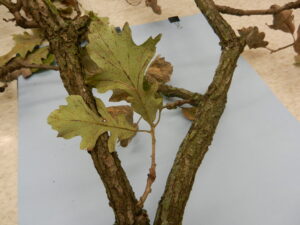 Figure 9: Veinal necrosis caused by bur oak blight viewed from the underside of an infected bur oak leaf. Leaves blighted by the fungus can be seen in the background. 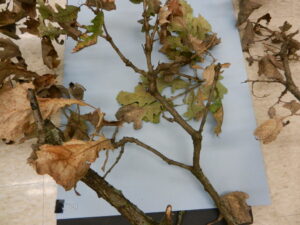 Although typical Tubakia leaf spots do not cause lasting damage to the tree, Tubakia iowensis, causal agent of bur oak blight (BOB), causes significant damage to bur oaks (Quercus macrocarpa) (Figure 8, 9, 10). Tubakia iowensis is reported to infect other oaks in the white oak group, but does not normally cause much damage (Figure 11, 12). BOB is characterized by wedge-shaped necrosis centered on the veins, and entire leaf blighting. If premature leaf drop occurs year after year, it will likely lead to twig dieback, however, trees will continue to leaf out every year. The disease tends to occur in the lower canopy and spread slowly, becoming more severe, year after year.  Symptoms, like Tubakia leaf spot, develop in July, August, and September, but infection occurs in the spring as leaves are emerging. A healthy bur oak will drop all its leaves in the fall, but infected leaves, or at least the petioles, will remain attached to the twigs throughout the winter and act as a source of inoculum in the spring (Figure 13). 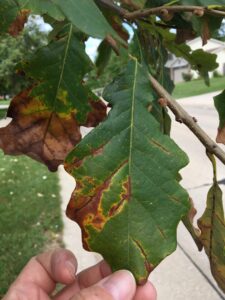 Figure 11: Veinal necrosis of swamp oak caused by Tubakia iowensis. Large wedged-shaped necrosis can be seed in leaves of the background. 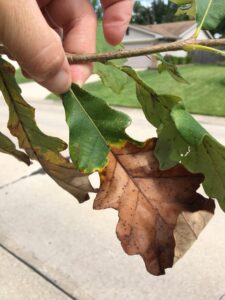 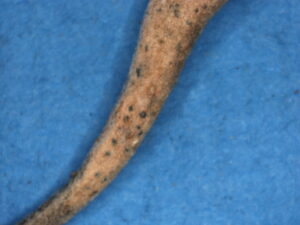 There are two biotypes of bur oak: one with smaller acorns (Quercus macrocarpa var. oliviformis) which is more susceptible to BOB; and one with large acorns, which is more resistant to BOB. Knowing which biotype is planted is important to determine if management efforts are needed. Significant branch dieback and tree mortality does not normally occur due to BOB alone, but is often associated with infestations by two-lined chestnut borers. It is important to prune out any dead branches or dead trees to reduce the borer populations that could be present. For more information on Bur Oak Blight, please see the video by Dr. Tom Harrington of Iowa State University.