Tobacco rattle virus (TRV) is a very important pathogen in the ornamental industry. Don’t let the name fool you. Much like Tomato spotted wilt virus and Alfalfa mosaic virus, TRV has a wide host range that includes more than 400 plant species, and is not restricted to Tobacco or vegetables. Plant viruses are named after the host plant it was originally found to infect and the symptoms they caused, so their names follow this basic formula: “Plant Host” + “Symptoms Caused” + Virus. While “rattle” symptoms are not commonly observed in many plants, the characteristic ringspots, mottling, and chlorotic line patterns that we associate with a plant virus are frequently found in TRV infected ornamentals. Over time, infected plants show reduced vigor and aesthetics, but highly susceptible plants can show dieback symptoms. 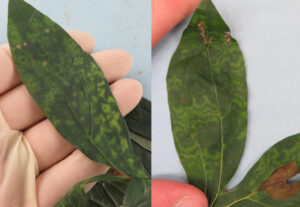 Leaves from a peony infected by TRV. Photo Credt: PPDL 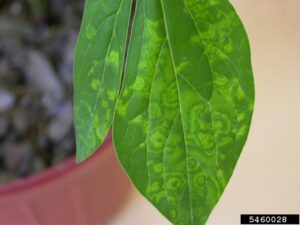 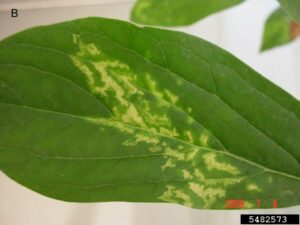 TRV can be transmitted by nematodes, sap transmission, and grafting. Stubby root nematodes, Trichodorus and Paratrichodorus species, can transfer the virus from infected hosts to non-infected hosts. This is especially problematic in farm fields or field grown nurseries where infection can occur year after year due to the presence of a nematode population in the soil. The virus can also be transmitted when sap from an infected plant and comes into contact with another plant. Propagation, pruning, and simple leaf injury can lead to the transmission of a virus by infested tools. Grafting, similar to propagation, will place infected tissue in contact with a healthy plant and allow virus transmission. 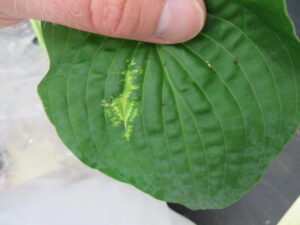 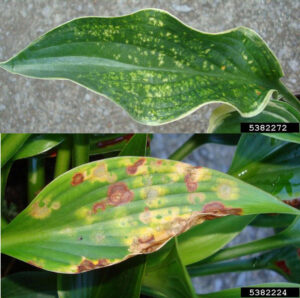 Any plant infected with a virus cannot be cured by use of pesticides. In most cases removal of symptomatic tissue may make it appear that the rest of the plant is healthy, but the virus is still present throughout the rest of the plant. Removal of infected plants is important to reduce the potential for spread of the virus to other nearby hosts. Disinfest tools if they come into contact with an infected plant using hot soapy water and washing your hands thoroughly. Professionals may use commercially available disinfectants, such as peroxide products, after cleaning tools of soil and organic material. Management of the vector is not very practical in landscape and home garden situations and is not recommended. Be sure new plants are healthy before installation and have them tested if they show virus symptoms. 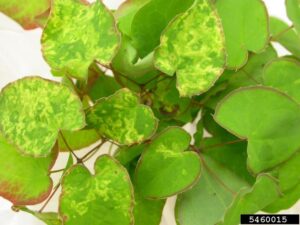