Biology: Pineapple weed (Matricaria matricariodies), behaves as either a summer or winter annual and it is commonly found throughout the United States. It is a weed of both high- and low-maintenance turfgrass lawns, landscapes, and nursery crops. Its ability to tolerate low mowing heights and highly compacted soils allow pineapple weed to compete with in weak turf and landscapes.

Identification: Pineapple weed can behave as either a summer or winter annual broadleaf in both high- or low-maintenance turf, landscapes, and nurseries throughout the Midwestern United States. It has a very low-growing, bushy, and branching growth habit and it reproduces by seed, which have the ability to emerge year-round if environmental conditions are favorable. Typically, the seedlings germinate in late summer to early fall and again from early spring to early summer. Young plants form a small, but dense rosette of fragrant, hairless, shiny bright green leaves that are also thick and succulent. Rosettes form from a very shallow taproot with a secondary fibrous root system. As the plant matures, the smooth, hairless stems continue to elongate in either an erect or a low-branching/spreading growth habit. The leaves are also hairless, fleshy and are pinnately divided with deep, finger-like lobes and short linear segments. All pineapple weed foliage (stems and leaves) have a very sweet odor similar to that of pineapple when damaged or crushed; thus, giving the plant its common name. From May through September, the plant produces flowers that are yellow, egg-shaped, and are composed of densely-packed, tiny, yellowish-green flowers. Flowers also emit a very sweet, pineapple like odor when crushed. Pineapple foliage can sometimes be confused with that of wild chamomile; however, the foliage of plants in the chamomile family can range from highly bitter to absent, not sweet and pineapple-like. 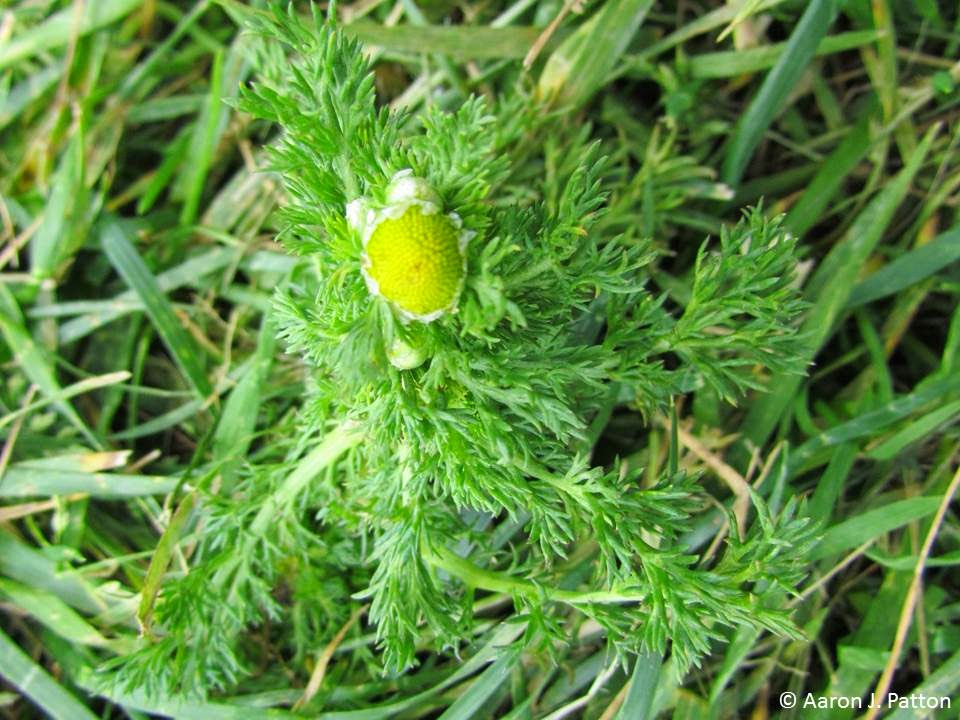 Figure 1. Pineapple weed has a sweet smell when crushed. 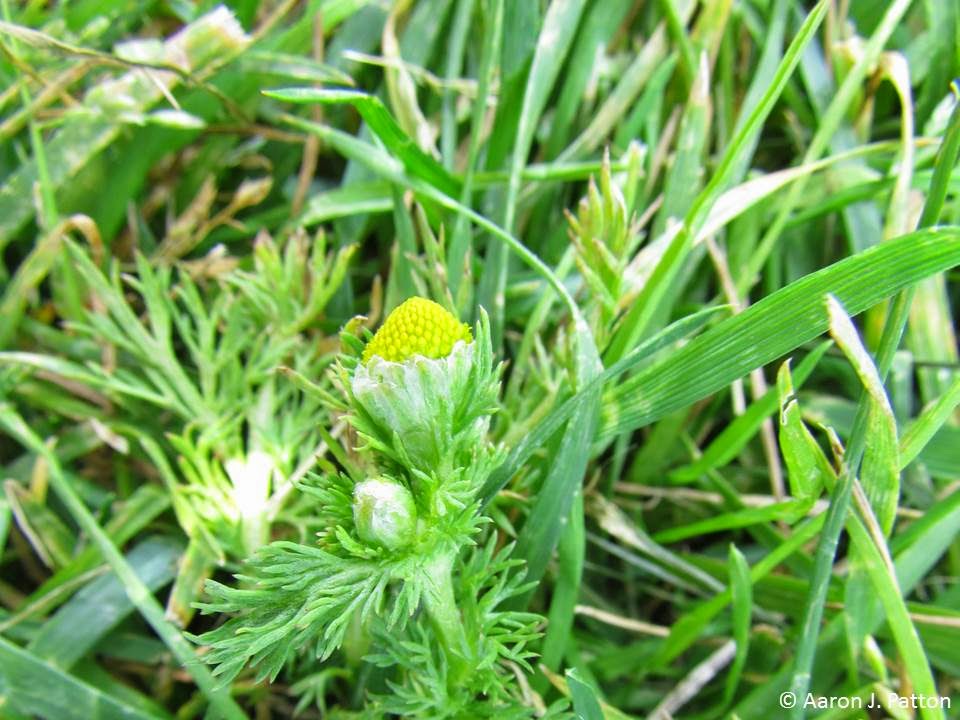 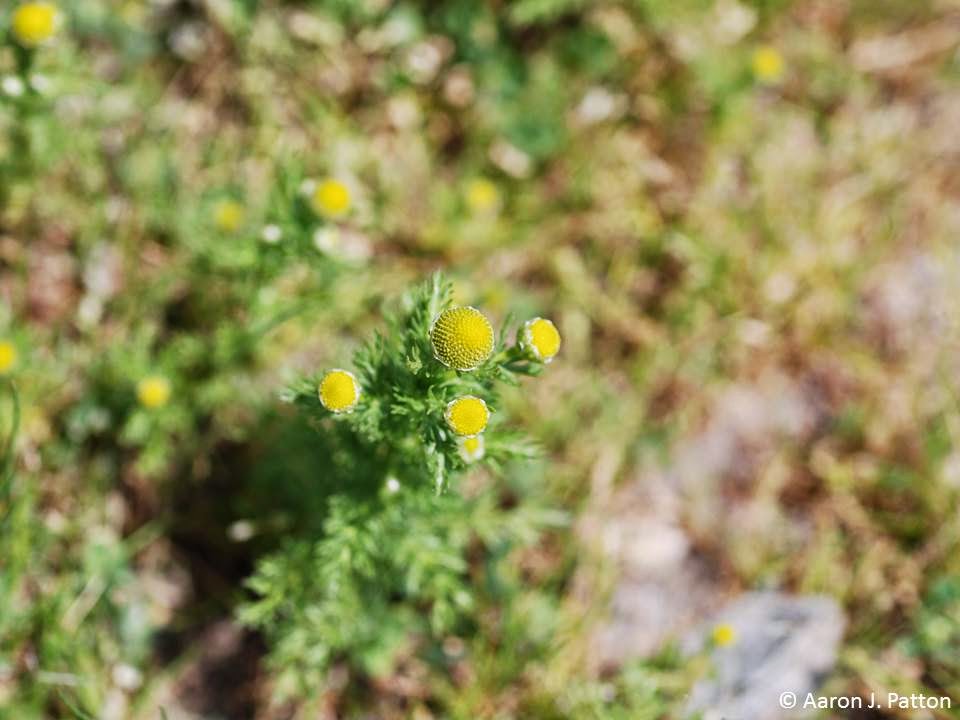 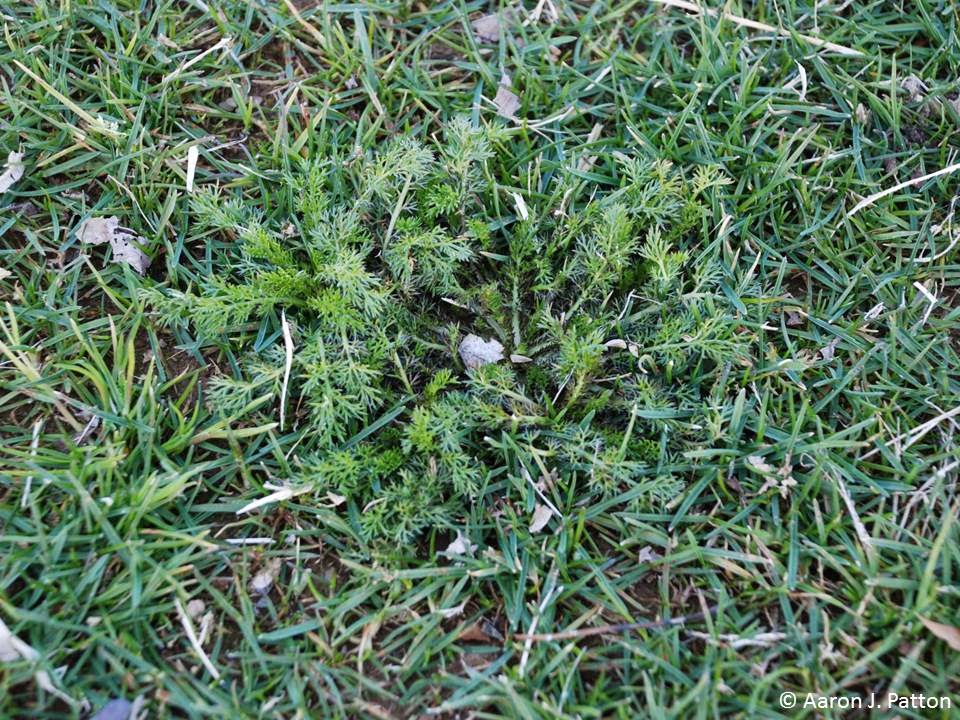 Cultural control: None known specifically for pineapple weed. Though it tolerates low mowing heights and compacted soils, a combination of frequent mowing, adequate fertilization, and irrigation to keep turf dense will help the desired turf compete and gradually eradicate pineapple weed. Reducing traffic will also help increase turf density and reduce pineapple weed invasion.   Due to this weed germinating from seed, mulching can help in reducing populations in the landscape.  Additionally, hand pulling small populations may help to physically remove pineapple weed due to its shallow tap root.

Chemical control: Since it reproduces from seed, it is possible to manage pineapple weed through the use of preemergence herbicides. However, control with preemergence herbicides may be difficult since the seeds have the ability to germinate year-round under favorable environmental conditions. In turf, postemergence applications of two- or three-way mixtures of 2,4-D, dicamba, MCPP, or MCPA will likely provide adequate control in established turf. Though dicamba does the majority of the work in controlling pineapple weed, the addition of MCPP often helps to increase the effectiveness of the overall application. In the landscape, glyphosate can effectively control as a postemergence herbicide.

For information on turf, check out the Purdue Turf Tips at https://turf.purdue.edu/turf-tips/.