Sudden oak death, as the name suggests, is a disease that is capable of rapidly killing certain species of oaks.  It was first identified in California, in 1995. Two years earlier it was identified in Germany and the Netherlands, killing rhododendron. Because the pathogen originally infected and killed tanoaks, an undesirable, understory scrub tree, it generated little interest until other, more desirable oaks species began dying.  However, by this point, the disease was well established and eradication no longer an option, with millions of oak trees killed by the disease.  Currently, over 120 hosts in addition to oaks have been identified, and more continue to be added to this list.  What is most unusual about sudden oak death is the severity of disease symptoms coupled with the broad host range of the pathogen. This leads to difficulty in diagnosing and managing this disease.

What causes this disease?

The pathogen that causes SOD is Phytophthora ramorum (pronounced Fī-toff-thor-ă  ră-mor-ǔm).  This pathogen belongs to a group of organisms in the Kingdom Chromista, and has characteristics similar to fungi, plants and animals.  It spreads throughout the plant by hyphal threads (like fungi), produces spores (like fungi) that have flagella and swim through water (like animals), but its cell wall is made up of cellulose (like plants). When conditions dry up, Phytophthora can produce thick walled sexual spores called oospores, or asexual chlamydospores. Because P. ramorum is not a ‘true’ fungus, many fungicides labeled for control of other fungal diseases are not effective against it.

With such a broad range of plant hosts, it is important to stress that P. ramorum affects different species in different ways. Identification must be confirmed in the laboratory and cannot be identified on field symptoms alone. Many common landscape shrubs are also infected by other endemic Phytophthora species, and symptoms look similar. Boring insects and other root rots may be mistaken for this disease. For this reason, all Phytophthora infections should be screened by the Purdue Plant and Pest Diagnostic Laboratory.

What are the symptoms of SOD?
To understand this disease, it is important to recognize that there are two categories of hosts: bark canker hosts and foliar hosts. Further complicating this is the fact that oaks are divided into three subgroups, and only the red oak group are susceptible to this pathogen. Of our 17 oak species in Indiana, half are potentially, or known to be susceptible, and include black, blackjack, cherrybark, Northern pin, pin, red, scarlet, and Shumard oaks. Diagnostic symptoms of infected red oaks include oozing sap and red-brown cankers that often leading to death. 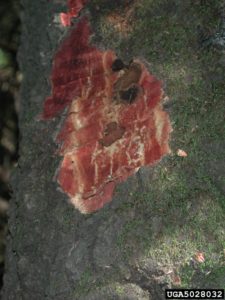 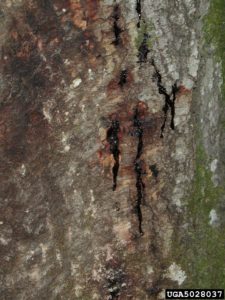 Our concern right now is on ‘the other’ hosts. Despite its name, sudden oak death primarily spreads through foliar hosts that are sold throughout the United States. Foliar hosts include rhododendrons, azalea, viburnum, lilac, and periwinkle (Vinca minor). 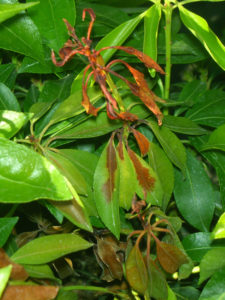 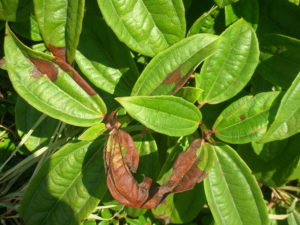 These hosts (and many others) are infected via the leaves and small branches. These infections rarely cause death, and can be mistaken for sunscald, twig canker, and dieback caused by other pathogens, including native Phytophthora species. Although symptoms from these infections are not severe, and are rarely fatal, the infections produce enormous numbers of spores that can infect neighboring, susceptible oaks—and other plant species. For this reason, we are asking people to examine any rhododendrons (or other co-mingled hosts like azalea, viburnum and lilac) purchased this spring from Walmart and Rural King, while the disease may still be controlled and the pathogen contained. Although this disease doesn’t look like much on rhododendron or lilac, its ability to spread to oaks and kill them is what makes it so devastating. These shrubs play a key role in the spread of P. ramorum, acting as a breeding ground for spores (inoculum) that can spread through water, wind-driven rain, plant material, or human activity. Oaks are considered terminal hosts, since the pathogen does not readily spread from intact bark cankers; they become infected only when exposed to spores produced on the leaves and twigs of neighboring plants.

How does it spread?

In the past month, P. ramorum has been positively identified in rhododendron sold at Rural King and Walmart (https://cbs4indy.com/2019/05/22/dnr-oak-tree-killing-fungal-pathogen-found-in-rhododendrons/) . If the pathogen becomes established in Indiana, sudden oak death could change the structure of American forests and landscapes, just as emerald ash borer is currently doing, and how Dutch elm disease did 50 years ago, or the chestnut blight did 100 years ago.

What can we do?

At this point, you should be aware that this is a new disease problem, with the potential of spreading throughout the Midwest.  No one can predict what the consequences could be if it gets introduced and becomes established in Indiana. Sudden oak death is most dangerous at the urban-forest interface, where forests meet with development, and people living at this interface should be observant for any changes in their landscape shrubs (rhododendron, azalea, euonymous, lilac, viburnum) and groundcovers, like periwinkle (Vinca minor).

If you believe you have an infected plant purchased from Walmart or Rural King in the last few months, the plant should be double bagged and destroyed by throwing in the garbage.  Sanitize any of garden tools and boots that that may have come in contact with the suspect infected plant. Please contact the store where purchased to discuss a refund. The IDNR cannot help with issues about refunds.

If the material came from a store that is not listed above OR was bought any time before February 2019 then it is not part of this infested shipment and to our knowledge should be clean of pests and pathogens.  Learn more about symptoms you should be looking for at: http://www.suddenoakdeath.org/maps-media/photos/plant-symptom-photos/

If you believe you have an oak tree that is infected please call 866 NO EXOTIC or call Phil Marshall, DNR Forest Pathologist, at 812-358-9034

Landscapers or nursery industry people may contact Megan Abraham directly at the number below.

Imagine how different things would look if someone had recognized the first dying ash in Detroit and identified the cause. For this reason, it is important to be vigilant, and know how to identify it so it can be quickly eradicated.

For more information on SOD, go to: