Rhizoctonia is not very picky. The fungus has a very wide plant host range where it can act as an endophyte, not causing damage to the colonized plant; a mycorrhizal symbiont, in some cases being essential for the hosts survival, like in some orchid species; and, as we commonly see it, a pathogen that causes disease. Rhizoctonia is often found attacking small plants, causing root rot, stem rot, and damping off of young and/or stressed plants in moist to wet weather (Figure 1). 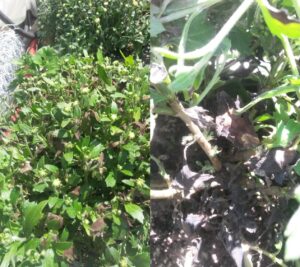 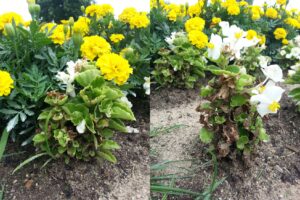 Another disease caused by certain strains of Rhizoctonia, which is not seen as often, is described as web blight due to the profuse amount of fungal hyphae covering the infected tissue which is killed fairly rapidly. Foliage may develop small tan, dark brown, or black lesions that expand overtime to blight infected tissue (Figure 2 and 3). Defoliation may occur, leading to foliage falling on uninfected leaves below (Figure 4) or blown by wind to neighboring plants, but blighting can occur so rapidly and the fungus can produce so much mycelium that the leaves are held onto the plant. On individual plants, symptoms tend to develop in the inner canopy first, but when plants are crowded, blighting can occur throughout the entire canopy. At first glance, symptoms may look like gray mold, but the lack of spores and gray coloration can help separate it from a Botrytis infection, especially when using a hand lens. Symptoms can develop within 4-7 days during summer months, favored by temperatures between 68 and 90 degrees Fahrenheit, with fastest spread between 75-86 F.

Rhizoctonia is primarily a soilborne fungus that does not readily produce spores. It grows as hyphae in the soil feeding on organic matter, within/on plants, and survives as sclerotia during periods of adverse environmental conditions. Sclerotia are dense aggregates of hyphal tissue that tend to darken over-time. These structures can last live for years within the soil and continue to germinate and infect plants. Either by hyphae or by sclerotia, Rhizoctonia is easily spread by introducing contaminated soil from one location to another or from infected plants to healthy plants. Water splash during rainy weather can lead to some soil movement into the canopy where the fungus may begin to infect susceptible hosts.

Disease severity is higher in situations where there is high relative humidity and low air circulation, which typically is seen in nurseries and greenhouses with high plant densities and plants with dense canopies. Web blight is best managed by cultural practices, where possible, but fungicide applications can help in mitigating the damage this fungus causes. Scouting for this disease, especially when it is a known problem, should be done on a weekly basis due to how quickly the disease can develop and spread.

Production systems
– Avoid overhead irrigation; irrigate early in the day
– Avoid overcrowding
– Do not re-use potting media; if re-using pots and flats, wash thoroughly/sanitize as needed
– Use clean/healthy starting material
– Increase air flow by increasing plant spacing (and use of fans in greenhouse conditions)
– Avoid moving soil or potting media from one location/block to another
– Avoid handling or working in plants when wet
–  Remove and destroy infected plant material 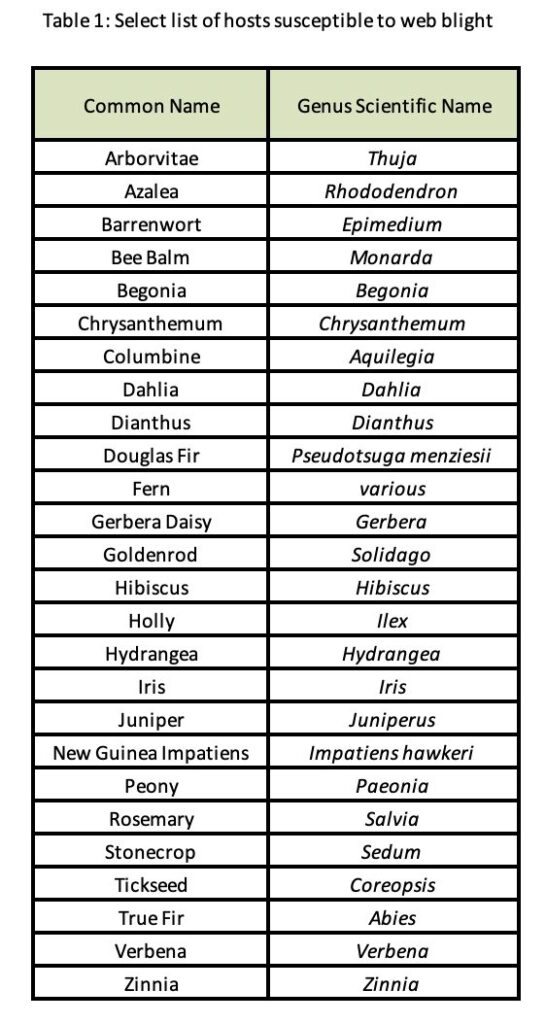