We often think of Phytophthora as mainly a root rot pathogen, but Phytophthora can also cause a bleeding trunk canker under the right conditions. The most commonly attacked trees we see in the diagnostic lab are American and European beech (Fagus spp.), and maples (Acer spp.); but this disease is also reported to occur on Magnolia (Magnolia spp.), dogwood (Cornus spp., oak (Quercus spp.) and other trees.

The presence of dark brown to black spots on the bark of trees near the base of the trunk may indicate a Phytophthora infection. These spots are the result of oozing sap from areas killed by the pathogen (Fig. 1). Phytophthora does not cause wood decay, but by killing bark and outer sapwood, it may allow entry of wood rot fungi that cause additional damage. The Phytophthora species that cause bleeding canker live in the soil and affected trees may also have damage from root rot disease, especially in poorly drained sites. Spores of the pathogen may be splashed up on the trunk and enter wounds or cracks in the bark. Affected trees may decline slowly and may show symptoms of early fall color (Fig. 2) or dieback (Fig. 3). Wilt symptoms may be present if much of the sapwood is killed and upward movement of water is limited. 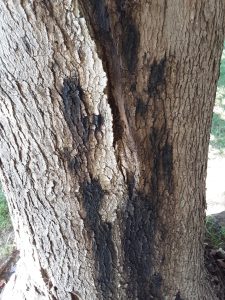 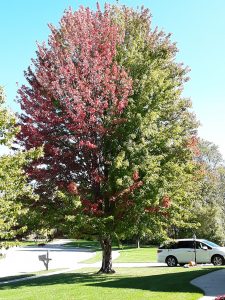 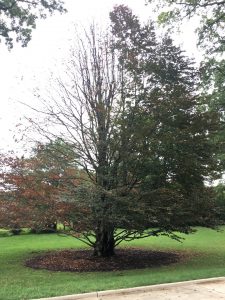 To reduce the risk of Phytophthora trunk canker plant susceptible trees only in well-drained sites. Mulch the root zone of trees to reduce water splashing soil on the trunk and to avoid injury to the trunk from mowers and string trimmers. While trunk applications of Phosphorus acid products may kill the pathogen where it makes direct contact, these products would be recommended only in cases where the infection was caught early. They will not rescue trees that already have significant damage.

Don’t assume all trees with black oozing sap have Phytophthora canker. Other problems such as injuries (Fig. 4), slime flux , pathogens like Botryosphaeria and Pseudomonas or wood boring insects can cause similar symptoms. To diagnose the problem, you can send samples of the bark and sapwood taken from areas with sap staining to a diagnostic lab; where rapid Phytophthora ImmunoStrip tests and isolations will be used to confirm the problem. The samples can be as small as one- to two-inch square chips of bark that go only deep enough to include a thin layer of sapwood (Fig. 5). 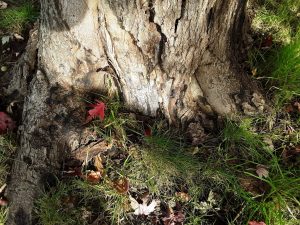 Figure 4: Physical injury at the base of this maple allowed entry of wood decay fungi, contributing further to decline caused by Phytophthora trunk canker. 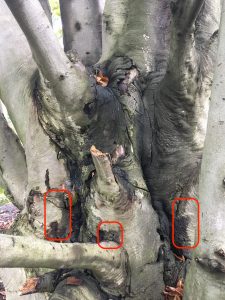 Figure 5: Phytophthora bleeding canker symptoms at the base of a European beech tree. The areas circled in red at the leading edge of the canker are good targets for collecting bark samples to send to a diagnostic lab for testing.