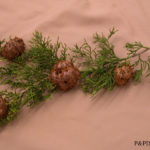 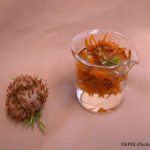 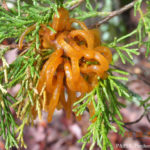 The bright orange gelatinous galls with tendril-like protrusions (Fig 1) resembling ‘koosh balls’ are caused by Gymnosporangium juniperi-virginianae. This fungal disease is known as Cedar Apple Rust. The galls develop on the cedar tree (Fig 2) and ‘sprout’ fungal spore-bearing tendrils during rainy periods in the spring (Fig 3 and 4). Spores from these galls infect apples and crabapples. 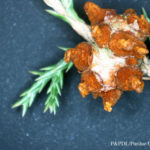 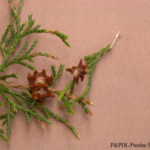 The smaller, less conspicuous branch galls, with horn-like protrusions shown in Figures 5 and 6, are known as Hawthorn Rust and are caused by the fungus Gymnosporangium globosum. The fungus alternates between Juniperus spp. hosts; and hawthorn, crabapple, and apple in addition to several other rosaceous hosts. 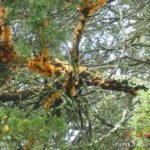 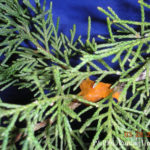 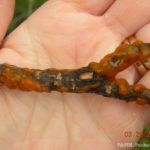 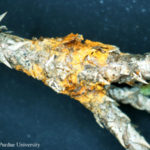 Gelatinous swellings on the cedar branches (Figs 7, 8, 9 and 10) are signs of yet another type of rust disease known as Quince Rust, caused by Gymnosporangium clavipes. This disease alternates between Juniperus and various rosaceae plants. Hawthorn (Fig 11 ) is one of the most notable alternate hosts of this Quince Rust on Cedar. Rust galls girdle hawthorn branches (Fig12) and cause dieback. 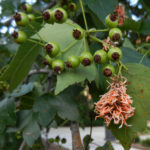 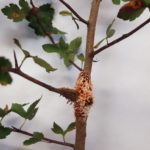 As noted above, these rust fungi require two separate hosts to complete their life cycle and thus the spores produced from the cedar galls are dispersed by wind-blown rain to infect succulent parts of various angiosperm hosts. During midsummer, spores are produced from infected angiosperm hosts and these spores are then blown back to their Juniperus hosts, completing the life cycle of this rust fungus.

The cedar-apple rust and hawthorn galls that form on eastern red cedar are unsightly, however usually cause little harm to the tree. During dry weather, galls can be pruned out and destroyed. The spindle shaped stem swellings of quince rust may eventually girdle branches and cause some minor branch dieback.  As per the publication below, management recommendations include the use of resistant varieties and preventive fungicide applications where these rusts are a perennial problem on high value susceptible plants.