Northern red oak (Quercus rubra) is a Midwest native and is generally well adapted to growth across much of the region, but we get questions about dieback or ‘flagging’ on it fairly regularly.

The two most common causes of twig dieback on this host are Kermes scale (Allokermes galliformis and A. kingii) and fungal canker/dieback pathogens (Botryosphaeria spp. and related fungi). Either problem alone can cause dieback but we frequently we see both the scale insect and the fungal pathogen(s) together on the same stem. In a recent small pilot survey of trees on the Purdue campus we found that all 10 twigs with Oak Kermes scale we collected also had fungal canker/dieback. This could be coincidence, but it seems to point to an association between the insects and the fungi involved. The scales may be creating wounds that allow easier infection by dieback pathogens or they may be stressing the tree enough that normally small twig infections move more quickly into small branches and cause noticeable dieback.

New cases of dieback (flagging) appear in mid-summer, around July, as small twigs or individual leaves turn brown near branch ends (Figs. 1 and 2). Oak kermes scales appear as one or more bumps present on petioles or stems where dieback is developing (Figs. 3 and 4). The size and distinctive stripe across the middle help distinguish them as Oak kermes scale (Fig. 5). Honeydew and sooty mold are usually also present on leaves and branches of heavily infested trees. Fungal dieback, when present in the absence of the Kermes scales often starts out in a similar pattern, but usually causes twig death instead of death of individual leaves. Stems with fungal cankers may have small cracks, sunken areas and raised bumps where fungal fruiting bodies are developing (Fig. 6). 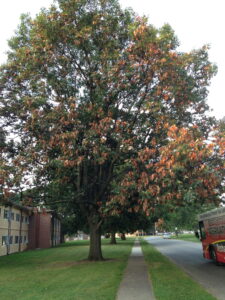 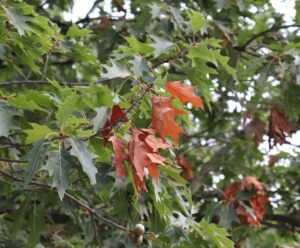 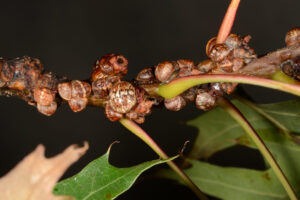 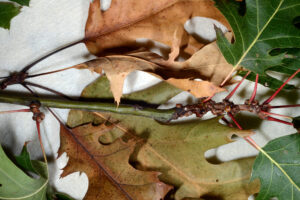 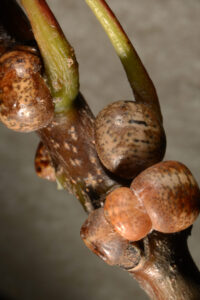 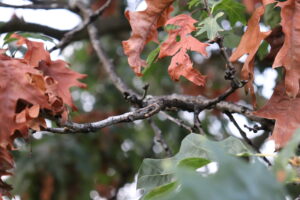 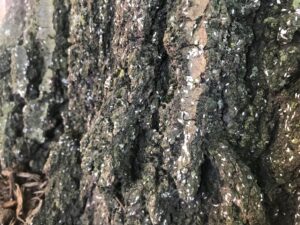 Oak kermes has one generation per year. They winter as immature settled scales on twigs and branches. When the weather warms in the spring, about May in the Midwest, the scales become active and move to a new site on the stems to feed. White male scales (Fig. 7) can be seen feeding on the trunk in June. Winged adult males emerge in early summer and fly to mate with females in the tree canopy. Mated females become rather large and brown with a distinctive light color stripe across the middle. They are capable of producing over 3000 eggs from July to early September. Eggs hatch into flat immature crawlers during September and October. These crawlers settle in nooks and crannies of twigs to feed before becoming dormant in the winter.

This group of pathogens (several species may be involved) are similar to each other, in that they overwinter in infected branches and twigs in the tree, then in the spring begin releasing both sexual (ascospore stage) and asexual (conidia stage) spores which can infect new twigs. Ascospores can become airborne and be moved by wind, but conidia are mostly dispersed by water movement during rainfall or periods of heavy dew. Small wounds from insect feeding, physical damage or pruning increase the chances of infection, but these fungi can also infect susceptible hosts directly in the absence of a wound through natural openings, such as lenticels, and direct penetration of succulent new growth. Botryosphaeria can attack a very wide range of woody plants so there is always plenty of inoculum around, either in your landscape or in your neighbors’ trees or nearby woods.

Insecticides are not very effective at controlling Oak kermes scale. Apply horticultural oil when scales become active in May. This will kill immature scales and conserve natural enemies that normally keep this scale under control. Some trials show that application of a pyrethroid insecticide (bifenthrin, permethrin) could cause greater rates of mortality. Pyriproxifen, an insecticide that has proven effective against armored and soft scales may also be useful at this time. Active ingredients which are effective against kermes include: Bifenthrin, Flupyradifurone, Horticultural oil (Paraffinic or superior oil), Permethrin, and Pyriproxyfen.

The list of options for managing the fungal pathogens is shorter still: prune out dieback where practical, control the scale where possible and optimize growing conditions for the tree to help it better resist infections. Fungicides are of no help in this situation.

If you suspect Oak kermes scale or a fungal dieback, photos of the tree can be sent to the PPDL along with branch samples containing both living and dead tissue. The transition zone from live to dead tissue is the ideal material for diagnosticians to use to isolate and confirm the fungal dieback and an entomologist can determine the presence of scale insects.