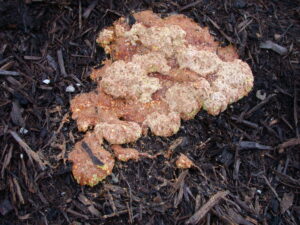 Are you noticing bright yellow, white and brown blobs on wood chip mulch?  These growths are known as slime molds. Slime molds are not parasitic and therefore do not cause disease. Slime molds get their nutrients from bacteria and small bits of organic matter which is why it is common to see them growing on mulch. One particular slime mold, aptly named “dog vomit slime mold,” Fuligo septica, (Figure 1) is very common in landscapes and draws the most attention.

The initial bubbling or slimy vegetative (plasmodial) stage may quickly transform into the reproductive stage, producing masses of brownish-black powdery spores within the oft-times crusty exterior. 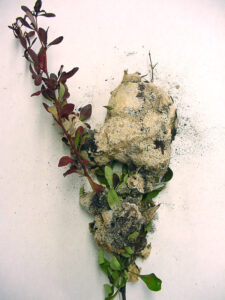 Figure 2. Slime mold on nearby plant.

Slime molds may be noticed growing up onto nearby plants (figure 2). They do not usually cover enough of the plant’s surface to reduce the photosynthetic process necessary for growth and thus do not harm the plant.

After several days of dry weather slime molds will usually become less noticeable. Although dried masses can be removed with a shovel, slime molds will likely reappear with the return of wet weather. Managing moisture (e.g. irrigation/drainage) may help limit or discourage their emergence.

An excellent description of slime molds and other “mulch dwellers”- may be accessed at the following web addresses.:

Tom Volk’s Fungus of the Month

Mushrooms, fungi and slime molds that grow in mulch or potted plants.

What Is Growing in My Landscape Mulch?—Information from Penn State University on a number of different “Mulch dwellers”