Now that garden planting season is in full swing, make sure to take precautions against bringing in jumping worm with your plants. This invasive insect is spreading around the Midwest and can seriously reduce soil quality. There is currently no proven way to control jumping worms in soil once they’ve established, so prevention is key.

Jumping worm (a.k.a. snake worms, crazy worms, Amynthas spp.) is an invasive species that dramatically alters the ecosystems where they are introduced. Unlike the earthworms we are familiar with which live deeper in the soil, jumping worms feed primarily on the topsoil. They rapidly consume nearly all of the organic matter in the topsoil. Plants have a hard time growing and establishing a sturdy root system in this soil. Additionally, jumping worms generally leave castings on the top layer of the soil which makes them more likely to get washed away in the rain. This further decreases the soil quality by removing even more organic matter. Researchers are studying management options, but there is currently no evidence-based way to control or eradicate jumping worm.

Depending on the temperature, jumping worms begin hatching in late spring. They are initially small but can grow to 8 inches by the end of the summer. There are several visual traits you can use to tell the difference between jumping worm and common earth worms (image 1), but the easiest way to identify them is by their behavior. Jumping worms wiggle more than other worms and have been described as jumping, thrashing, and moving like a snake. You can also identify jumping worm based on changes in soil quality. Soil invaded by jumping worm has a grainy, “coffee ground” texture and little or no organic material in it (image 2).

If you’re concerned there might be jumping worm in an area where you live or work, you can submit a sample to the Purdue Plant and Pest Diagnostic Lab. 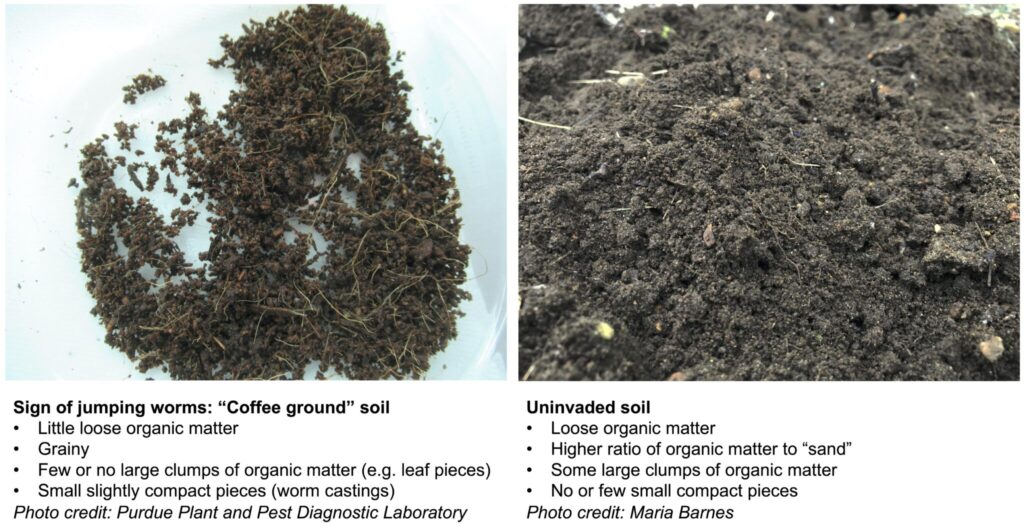 Jumping worm can spread through soil, compost, and other similar organic material. You can reduce the risk of spreading it between job sites or to your home by:

Unfortunately, we don’t have a clear picture of where jumping worms are located yet but with your help we can track their spread. If you’ve seen a jumping worm or any other invasive species, report it! Take a picture and report it through:

Jumping Worms: What Anglers Should Know