We receive a lot of ailing conifers at the Plant and Pest Diagnostic Laboratory each year. We received 870 ornamental plant samples in 2020 and 190 (21.8%) of them were conifers. While arborvitaes (Thuja spp.) do not beat out spruce in the number of samples we receive in a given year, they make up 20% of our conifer samples (39 in total 2020). They are widely planted in the landscape, especially in rows as a privacy hedge, which may explain why we see so many problems on them.

Arborvitae require quite a bit of attention until they become established and often show the stress of poor care during and after installation. Arborvitae tend to suffer and decline quickly when experiencing soil moisture extremes, whether too dry or too wet, which becomes apparent as the tree starts browning from the bottom up.

The majority of problems we see are associated with these evergreens are due to environmental stress, transplant shock, spider mites, deer browsing, and bagworms, but when we do find a disease it is a rare treat to us pathologists. Arborvitae needle blight, caused by two different fungi which are occasionally found together on the same plant at the same time, is one of the very few diseases that we encounter on this host. Symptoms associated with needle blight include browning, death, and desiccation of the branch tips, leading to branch dieback (Figure 1, 2, 3, 4). Infection occurs as the needles are emerging in the spring and show up at multiple sites lower in the tree canopy. Since both fungi, Phyllosticta and Pestalotiopsis, produce spores that are moved by wind and water splash, infection also takes place during wet, rainy weather. Phyllosticta and Pestalotiopsis both produce dark fungal fruiting structures on affected tissue that produce asexual spores, so determining which fungus, if not both, are present requires microscopic examination (Figure 5).

Both fungi are regarded as weak pathogens and are suspected to infect trees that are already predisposed by other forms of stress, such as improper/aggressive pruning, cold/freezing injury, water stress (drought), physical injury, and transplant shock. Chemical management is not normally needed to manage these diseases. Disease severity typically increases as plant stress increases, so when this disease becomes apparent, it is important to also address any other problems the tree is facing to improve overall plant health and vigor. In addition, pruning out infected material will prevent further stem dieback as well as reduce inoculum for future seasons. Avoid handling/pruning the tree during wet weather as this could potentially spread fungal spores to new spots in the plant canopy. When installing arborvitae, be sure to provide adequate plant spacing to prevent crowding and excess competition for water and root space as the tree grows. Also ensure you are picking locations that provide adequate sunlight and drainage.

Both Phyllosticta and Pestalotiopsis can infect other conifers, including junipers (Juniperus) (Figure 6), fir (Abies), spruce (Picea), and false cypress (Chamaecyparis),so if you do find these diseases you may want to monitor other nearby conifer species for symptoms of dieback. Fungicides are not recommended for management since these problems are stress related. 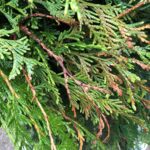 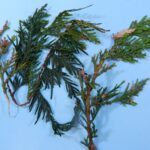 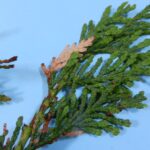 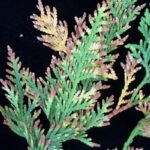 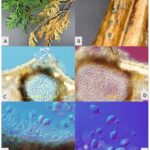 Figure 5 Symptoms and signs of arborvitae needle blight caused by Phyllosticta thujae. A: Branch symptoms; B: Pycnidia produced by the fungus; C-F: Microscopic view of a leaf section including the pycnidium and asexual spores. Photo Credit: Bruce Watt, University of Maine, Bugwood.org 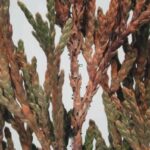