As summer draws to a close webs can become a common sight in the landscape. Some web-makers feed on trees and shrubs, while others feed on pests. Learning the difference can take the worry out of late summer.

Fall webworms build massive webs that are particularly prominent at this time of year (figure 1). These yellow, fuzzy caterpillars will happily eat the leaves of more than 100 species of hardwood trees. Fall webworms hatch in midsummer and continue feeding on trees through early September. They construct white, gossamer webs on tree branches where they spend time hiding from predators and daytime heat. Caterpillars tend to build their webs around the ends of branches and expand outward. The webs are messy and show little obvious structure. The initial webs are small and usually go unnoticed. By the time webs are visible from a distance, the caterpillars are generally almost finished eating leaves for the summer. 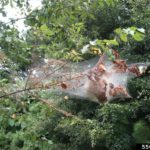 A. Fall webworm webs start at the end of braches and expand down them. Webs will often contain partially eaten dead leaves. 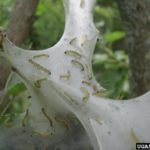 B. Fall webworm caterpillars are yellow with fuzzy tufts of hair. They spend part of the day outside the web and part of it hiding inside.

In landscape trees, fall webworms are primarily an aesthetic issue on healthy trees. Caterpillars eat leaves shortly before they drop in the fall so the tree only experiences minor stress. However, they can harm already stressed trees particularly during outbreak years and can be an eyesore on landscape trees. Management options include mechanical removal of the caterpillars or using insecticides.

Funnel weaving spiders earn their keep by feeding on small insects (e.g. gnats, mosquitoes, even Japanese beetles) that get snared in their web. Spiders in the family Agalenidae weave funnel shaped webs across gaps of foliage on dense shrubs to ensnare their prey. Webs have broad flat platforms and one or more round funnels that the spiders hide in (figure 2). Numerous tufts of webs are clearly visible on foliage, especially in morning dew. These spiders are also called grass spiders when they weave funnels in turf. 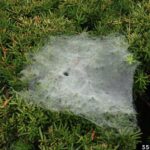 A. Funnel weaver spiders spin flat webs that are commonly found in bushes, in grass, and on trees. The webs have a small hole near the center that forms the opening of the funnel where the spiders hide.

B. When prey lands on the platform of the webs, funnel weaving spiders dart out from their funnels to grab it. These spiders are typically light to dark brown and often have visible sensory hairs on their legs.

Spiders hatch in spring and begin making small webs across foliage. Webs become larger and more numerous in late summer and fall. No control is needed.  Unlike in other parts of the world, there are no medically significant funnel weaving spiders in North America. Unsightly webs can be knocked off with a hard stream of water from a garden hose.

How to tell web makers apart

To tell these animals apart, look at the structure of the webs and for the occupants. Funnel weaving spiders build mostly flat webs with a single primary layer (figure 2) whereas fall webworms build messy, multilayered webs that enclose the ends of branches (figure 1). Look for funnel weaving spiders inside their funnel. If the funnels are too dark to see into, use a flashlight to look for the reflection of their eyes. Look for fall webworms near the center of their webs. They make frequent trips outside of the web but there are almost always a few left inside.