One of the most common weeds that present significant challenges to both landscapers and growers are thistles.  There are several reasons that thistles are difficult to control, including thousands of viable seeds per plant (Fig. 1), rhizomatous growth characteristics (Canada thistle) (Fig. 2), and large root system (Fig. 3). 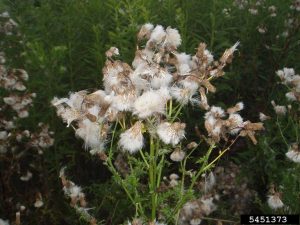 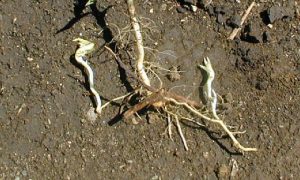 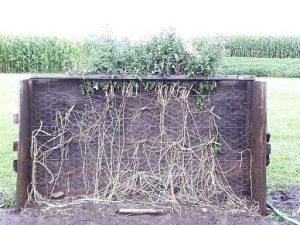 There are three major types of thistle that are encountered in the Midwest:

There are also several sowthistle species, which we won’t cover in this article.

To begin understanding these thistle species, it’s important to understand the life cycles of each.

Canada thistle: a rhizomatous perennial that reproduces at the rhizome nodes (Fig. 2) and via seed dispersal in the wind (Fig. 1).

Bull thistle: a biennial that spends its first year as a basal rosette, followed by the second year reproductive phase.  Reproduces via wind-blown seed dispersal.

Musk thistle: a biennial (sometimes a winter annual) that begins as a basal rosette followed by reproduction in the second year.  Reproduces via wind-blown seed dispersal.

Cultivation is effective at controlling musk and bull thistle, but can actually increase the infestation of Canada thistle.  Mulching can help in reducing the germination percentage of wind-blown seeds.  Preventing Canada thistle roots and rhizomes when bringing soil into a property is effective in preventing an infestation.

Though there are some insects that use thistles for a food source, there are no effective biological control options.