The bursting of buds on the trees signals the arrival of spring, but warm weather also portends the hatching of pest insects. Three that feed on trees and shrubs to watch out for are spotted lanternfly, eastern tent caterpillar, and spongy moth.

Spotted lanternfly is an invasive insect that can be found on the East Coast and was discovered in Indiana last summer. It has been found in the southeastern part of the state, but there may be other populations that have not yet been reported. Depending on temperatures, spotted lanternfly egg hatch can begin anywhere from late April to May. Now is the time to scout for these insects. Stay vigilant for this insect and report any sightings.

Spotted lanternfly nymphs (juvenile life stage) prefer plants with thin bark like roses, grapes, tree of heaven, and perennials. They may also be found on saplings and new shoots of their other host plants like birch, black walnut, fruit trees, and maple.

Spotted lanternfly feeding can kill grape vines within a single summer. Intense feeding can cause dieback of small branches of other host plants. Additionally, early study results suggest that heavy spotted lanternfly feeding can weaken trees and plants sometimes making them more susceptible to other stresses like drought and disease. Researchers are still learning about the long-term impacts of this insect so we strongly recommend staying up-to-date with the current research regarding its impact and management. 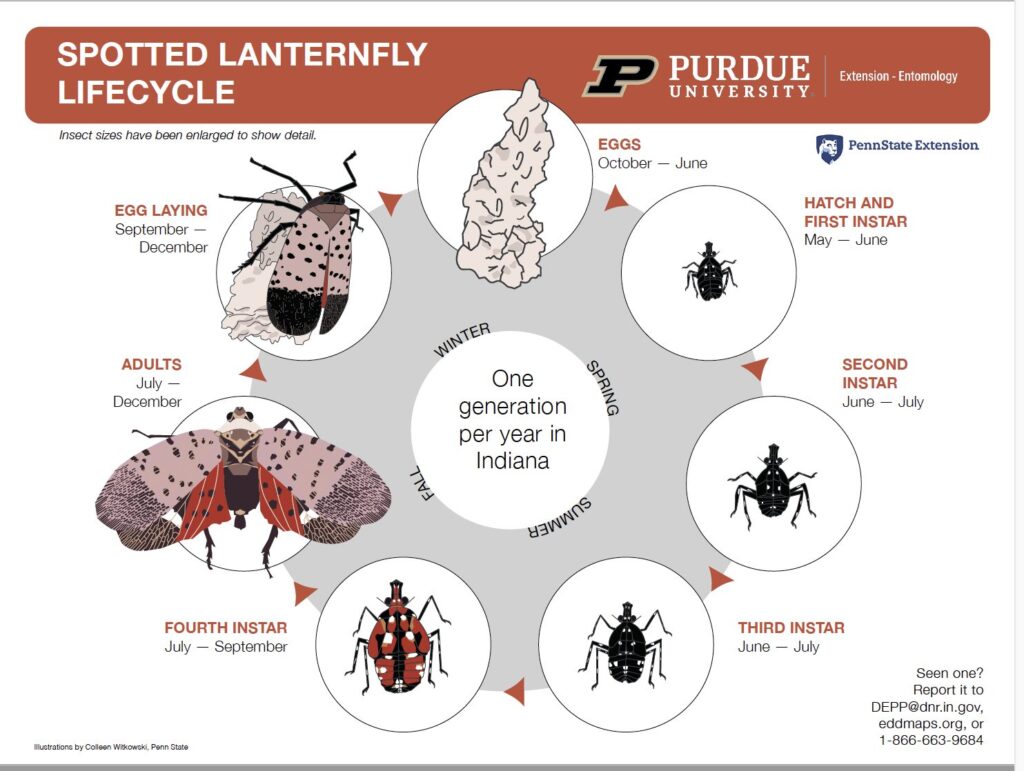 Figure 2. Spotted lanternfly can be found in their nymphal and adult stages from about May to December and as eggs overwinter. The timing listed is approximate and dependent on temperature.

Eastern tent caterpillars begin to emerge around budbreak and construct silk tents on trees. Though these caterpillars rarely cause serious damage to trees, they are considered unsightly by some. 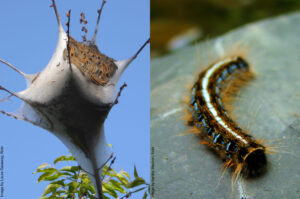 Figure 3. Tent caterpillars build silk tents that they rest on and hide in throughout the day. They often venture out to surrounding branches to feed during the day. Caterpillars are hairy and typically have a white to cream colored stripe down their backs and blue spots on their sides. Photos by Laura Gasaway, flickr and Ashley Waldron, flickr.

Eastern tent caterpillars have blue-black bodies with white and gold stripes down their backs, blueish spots, and golden hair (figure 3). They are typically found in large groups until their last instar when they disperse. These caterpillars build messy silk webs that are called tents on tree branches (figure 3). They retreat to these tents throughout the day and at night. Caterpillars sometimes form lines from their tent to feeding sites.

Eastern tent caterpillars can eat a wide range of plants but tend to prefer plants in the Rosaceae family like cherry, apple, and chokecherry. They can also sometimes be found on maple and hawthorn.

Spongy moth (formally known as gypsy moth) is an invasive insect typically found in northern Indiana as well as much of the East Coast, Michigan, and Wisconsin but it can also appear in isolated populations in other areas. A good rule of thumb is that generally a wet spring means low levels of spongy moth and a dry spring can mean high levels of spongy moth, though there are, of course, exceptions. 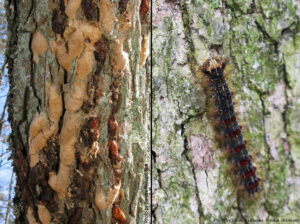 Figure 4. Spongy moth caterpillars lay brown egg masses covered in hair. They can be found on just about any surface outside and in outbreak years may be clumped together. Their caterpillars have blue-black bodies with blue and red bumps on their backs in two rows. Photos by Sandra Richard, flickr and Elizabeth Barnes, Purdue University.

Spongy moth egg masses are light brown, oval, and furry (figure 4). The caterpillars are extremely small when they hatch in April and May, but can grow up to 2 inches later in the summer. They have blue-black, hairy bodies with rows of paired blue and red spots down their backs (figure 4).

Spongy moth caterpillars strongly prefer oak trees but will also eat willow, sweetgum, poplar, apple, pine, and over 500 other species of plants. They generally start with oaks and move to these other plants if they run out of leaves.

Spongy moths can completely defoliate trees in one year and seem to disappear the next. They generally only cause serious problems for tree health during outbreak years which are more likely to occur following a dry spring. The seriousness of the damage to trees depends on the species of tree and the number of other stresses it experiences before and after the defoliation. You can learn more about spongy moth damage here. Arborists and other green industry professionals can be consulted if you have concerns about the health of a specific tree.