Bud break doesn’t just mean the arrival flowers and leaves, it also means tent caterpillars begin to hatch. Within a few weeks, troops of these caterpillars can cover tree branches with their silk tents. So, should you be concerned about them? Read on to find out! 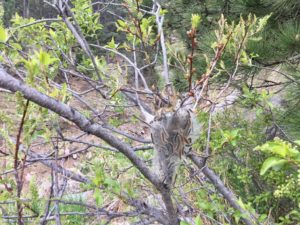 A typical western tent caterpillar tent. These tents can usually be found in the crooks of major branches on trees and medium sized shrubs. 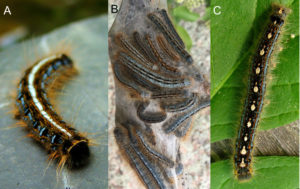 What do they eat?

What damage do they do?

Although some people may find them unsightly, in most years tent caterpillars do not cause serious injury to their host plants and can even be beneficial to their environment by providing a food source for wildlife. Typically, tent caterpillars only defoliate a few branches and only actively feed for a few weeks. Even in outbreak years when they can fully defoliate small trees, most plants are able to bounce back to health after the caterpillars have moved on. However, if the tree is defoliated multiple years in a row or is dealing with another stress like drought it may lose branches or even die. See this PLR article to evaluate the potential impact of defoliation on your tree.

If you do wish to remove tent caterpillars from your trees, there are a wide range of options available to you. One of the easiest ways to get rid of tent caterpillars is manually removing them. Wait until most of the caterpillars are in their tent and then simply pull the tent off the tree, place it in a bag, and freeze it. Tent caterpillars leave their tents multiple times a day to feed so your best chance for catching them all in their tent is a night. You may want to wear gloves to remove them from their tree because some people have an allergic reaction to their hairs. In addition, most of the options described in this article for treatment of fall webworms will work for tent caterpillars (make sure to double check label instructions).

If you think you’ve found some tent caterpillars but aren’t sure, feel free to reach out to the author or post it on iNaturalist or BugGuide for ID help!