The Invasive Terrestrial Plant Rule was signed by Governor Holcomb and published on March 18, 2019.  The rule goes into effect 30 days after publishing, so it will be effective later in April.

The rule states with respect to the 44 plant species included on the rule:

“a person must not:

(1) Sell, offer or grow for sale, gift, barter, exchange, or distribute a species;

(2) Transport or transfer a species; or

(4) Subdivisions (1) and (2) of this subsection are effective one year after the effective date of this rule.”

Selling, offering, distributing and transport doesn’t go into effect until April of 2020, so nurseries will have some time to sell down their stock.  This is an important component of the rule to minimize economic loss to nurseries that grow and/or sell the few commercially available species that are on the list.  Currently there is no mandate to eradicate existing plantings in nurseries, landscapes, or forested areas.

What is an Invasive Species?
An Invasive Species is defined in Executive Order 13112 as “an alien species whose introduction does or is likely to cause economic or environmental harm or harm to human health.”  These species often change their habitats by outcompeting native species for the resources needed to survive.  The result is loss of diversity and degradation of natural habitats.

What damage do invasive species do?
Invasive species often displace native species, reducing diversity and degrading the habitats in which they have been introduced.  These invaders have negative effects on property values, agricultural yields, public utilities, recreation, and tourism.  In addition, Indiana landowners and managers spent over $5 million controlling invasive plants in 2012 according to a survey by the Indiana Invasive Species Council’s Invasive Plant Advisory Committee.  The economic impact of invasive species globally has been estimated at 5% of GDP which in Indiana approaches $15 billion.

What is Indiana doing?
The Terrestrial Plant Rule (312 IAC 18-3-25) designates 44 species of plants as invasive pests.  This rule makes it illegal to sell, gift, barter, exchange, distribute, transport or introduce these plants in the State of Indiana.

What is Purdue Extension doing?
Purdue Extension has a long history of addressing invasive species including invasive plants with established programs and expertise, and a reach into every county with dedicated Educators. Information about these efforts are being updated in the Report Invasive website, hosted by Purdue College of Agriculture and the Indiana Invasive Species Council.

What does the Terrestrial Plant Rule restrict?
These plants are not to be sold, gifted, bartered, exchanged, distributed, transported or introduced in Indiana. 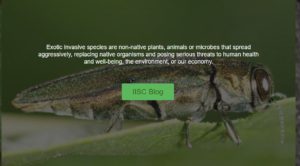 The following are prohibited invasive terrestrial plants and are declared pests or pathogens regulated under this section:

For more information on the rule and invasive species: