Getting calls from panicked customers about black spots on maple leaves? You’re probably not alone, because now is the time when people start to notice maple tar spot.

Every summer we get questions about black spots on maple leaves that look like tar. These spots are not actually “tar” on maple, but are rather a fungal disease known as tar spot.  These photos show a range of symptoms presented by this disease. 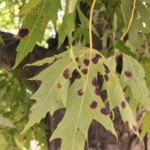 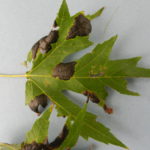 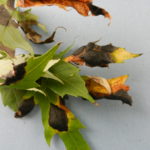 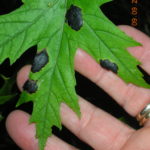 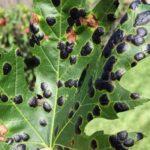 Tar spots on maples are caused by fungi in the genus Rhytisma. The most common species are Rhytisma acerinum and R. punctatum.  Symptoms first appear in late spring or early summer as infected leaves develop light green or yellow-green spots. During mid to late summer these produce black tar-like raised structures on the upper surface of leaves within the yellow spots. R. acerinum causes larger spots that are 0.5 to 2 cm in diameter; R.punctatum causes many small punctate spots that are smaller (about 1mm in diameter). Spots caused by R. punctatum are sometimes called speckled tar spots.

The good news is that tar spot causes little stress for the trees that are infected, despite some loss of leaf function and occasional premature defoliation.

Fungicides are not recommended for this problem. Tar spot can oven be reduced for the next year by raking, chopping and composting fallen leaves or removing leaves from the property since the fungi overwinter on leaves.