Biology: Prostrate Spurge (Euphorbia humistrata) is a summer annual broadleaf weed that can be found in dry/sandy and/or nutrient-poor soils along with compacted, weakened or disturbed turfgrass and landscape sites. Look for it first in driveways and sidewalks or in potted plants in a landscape or nursery as temperatures start to get warmer. Prostrate spurge can also be found in cultivated fields, brick walls, and parking lot cracks. It germinates from seed in June and July in Indiana and spreads via low-growing prostrate stems than form a dense mat. Its ability to establish and grow in multiple soil/climate conditions and highly compacted soils, as well as its ability to withstand low mowing heights, make prostrate spurge a common weed throughout the state of Indiana. 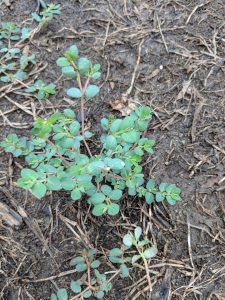 Identification: Prostrate spurge is a low-growing summer annual weed in Indiana. The plant is anchored by a central shallow taproot and, as suggested by its common name, it forms a ground-hugging mat with prostrate stems that grow outward. The plant produces these spreading stems along with viable seed very quickly, often within a couple of weeks after germination. 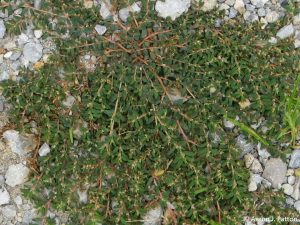 The leaves of prostrate spurge are pale green, hairy, egg-shaped, widest at the apex, and located opposite of each other on the stems which are pinkish in color and distinctly hairy. Prostrate spurge continually flowers from July to September and produces large quantities of viable seed throughout its life cycle. These flowers are small but numerous, originate from the base of leaves located on the upper-stem, and are composed of several male and female flowers within a cluster. It produces a fruit that consists of a 3-lobed, 3-seeded capsule with stiff hairs on its surface. 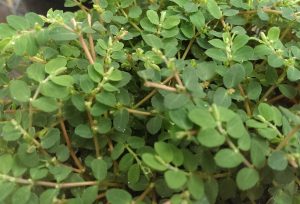 Prostrate spurge is very difficult to distinguish from other spurge species, particularly spotted spurge (Euphorbia maculata). In fact, some taxonomists consider the two plants to be the same species. An identifying characteristic of both species is a small reddish-brown splotch at the mid-vein/base of the leaves which acts almost as a camouflage; thus, making the weed difficult to distinguish from the desired turf. The primary difference between these two species is that spotted spurge leaves are often darker in color and the nodes do not produce roots when they come into contact with the soil. 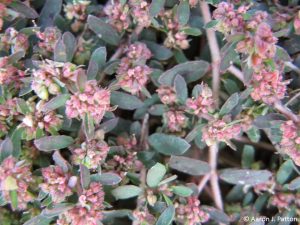 Figure 4. Flowers of prostrate spurge on the upper stem.

Additionally all spurges exude a milky/white sap when damaged that can be toxic to animals if ingested. 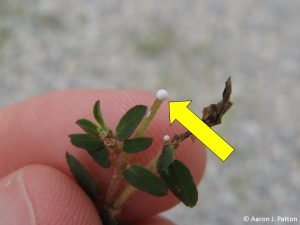 Figure 5. Spurge will exude a milky white sap when injured.

Cultural control: None known specifically for prostrate spurge. Proper turf management such as adequate mowing heights, irrigation, and fertilization will help to produce a dense, aggressive turf which is the greatest defense against invading weeds. Prostrate spurge also thrives in compacted soils; thus, soil cultivation (hollow-tine aeration) may aide in management of the weed. Due to its shallow taproot, prostrate spurge can often be hand pulled when populations are small enough; however, it is important to remove weeds as soon as possible due to its ability to produce copious amounts of viable seed very quickly after germination.

Chemical control: Control options for prostrate spurge can include both pre- and postemergence herbicides. Preemergence control can be achieved with spring applications of isoxaben (Gallery, Isoxaben) prior to germination in summer. Dinitroaniline herbicides (such as Barricade, Pendulum) can also be applied for prostrate spurge control though the results are often less consistent than applications of isoxaben.

Spurge can be controlled in the landscape with most postemergence herbicides, including contact and systemic herbicides.  Typically glyphosate is used to control via postemergence application as a general weed management program.

Once spurge germinates, control in cool-season turf can be achieved with applications of two- or three-way mixtures of 2,4-D, dicamba, MCPP, or MCPA which are available in multiple product formulations at local retailers. Repeat applications may be necessary due to the germination of new seedlings.