Biology: Ground ivy (Glechoma hederacea), also known as creeping Charlie, is a very difficult to control perennial broadleaf weed. It can often be seen growing in the shade and invading turfgrass and landscapes throughout the United States. Ground ivy thrives in moist, rich soils located in shaded areas, but will grow in full sun as well. These traits combined with the ability to produce aggressive rooting stolons, tolerate low mowing heights, and shade/crowd-out surrounding plants, help to make ground ivy one of the most difficult-to-control weeds.

Identification: Ground ivy is a perennial broadleaf weed that invades through aggressive stolons that ‘creep’ below the turfgrass canopy. It forms very dense, mat-like patches that effectively crowd-out the surrounding turf. Like other members of the mint family, ground ivy has distinctive square stems with two leaves branching from each origin point (node) and emits a disagreeable odor when crushed, damaged, or mown. Leaves are round to kidney-shaped with prominent veins and broad rounded edges. These leaves are held above the canopy by long petioles (leaf stems). Spreading stolons root aggressively at the node, further making ground ivy difficult to control. It produces flowers from April to June that are tubular in shape, purplish blue with red speckles, lobed petals, and are arranged in groups of three to seven. Ground ivy can often be mistaken for other broadleaf weeds such as common mallow, purple deadnettle (https://www.purduelandscapereport.org/article/spotlight-on-weeds-purple-deadnettle/), or henbit (https://www.purduelandscapereport.org/article/spotlight-on-weeds-henbit-lamium-amplexicaule/). However, common mallow has rounded stems and sharply toothed leaf edges while henbit and purple deadnettle stems do not ‘creep’ along the ground nor root at the nodes. 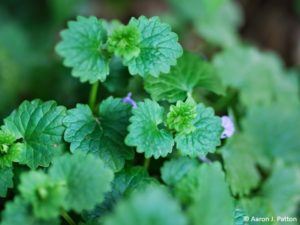 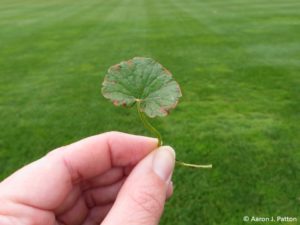 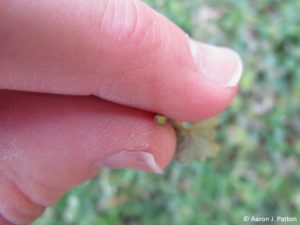 Figure 4. Ground ivy has square stems, the common characteristic of plants in the mint family. 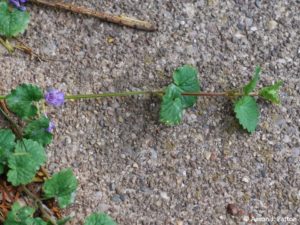 Figure 5. Ground ivy spreads by very aggressive stolons with the ability to root at each node. 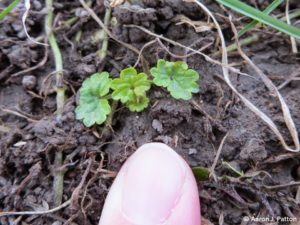 Figure 6. A node in contact with the ground via stolons produces a new plant. 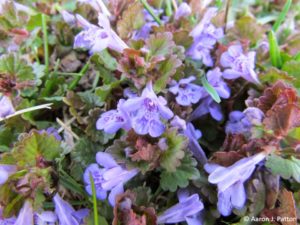 Cultural control: Because of its aggressive growth and establishment, there are very few cultural practices that have been observed to effectively control ground ivy. Management practices such as improving surface drainage, watering deeply and infrequently, and cultivating (aeration) compacted soils may hinder the development of ground ivy.

Biological control: None known for specific use in ground ivy.

Chemical control: Because of its aggressive nature and the survivability of stolons, there are few preemergence herbicides that will work.  Sureguard/Broadstar (flumioxazin) can reduce populations and Gallery (isoxaben) can help reduce the ability of stolons from rooting which will slow the spread of this weed. As a result, management must focus on postemergence herbicides. The two most effective postemergence herbicides labelled for ground ivy in the landscape include Dismiss (sulfentrazone) and Certainty (sulfosulfuron).  Glyphosate is not nearly as effective and will take several applications to control ground ivy.   Most herbicides require supplemental applications for adequate control.