Biology: Common chickweed (Stellaria media) is a winter annual broadleaf weed. In lawns, it forms dense, prostrate patches throughout North America, but can grow relatively tall in the landscape. Common chickweed germinates from seed in late summer or early fall. However, germination timings can vary throughout the year if conditions are shady, and moist enough. 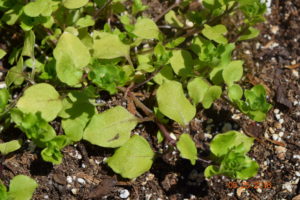 Figure 2. Common chickweed has a pointed apex at the end of the leaf.

Identification: Common chickweed is predominantly a winter annual broadleaf weed that can be identified by its prostrate growth habit and leaf shape. Common chickweed leaves are located opposite each other on stems that may be hairy on older portions and smooth on newer growth. Additionally, leaves are light green, smooth, and oval- to egg-shaped that come to a point at the apex. Leaves located on the upper portions of the stems have no petioles (leaf stems) while leaves located lower on the stems have long, sparsely-hairy petioles. Common chickweed produces small clusters of white flowers with five daisy-like petals in early spring. Flower petals have a deep centered lobe that makes it appear as though there are ten petals. Common chickweed can often be mistaken for mouse-ear chickweed; however, mouse-ear chickweed leaves are more oblong in shape and are densely covered in soft hairs. 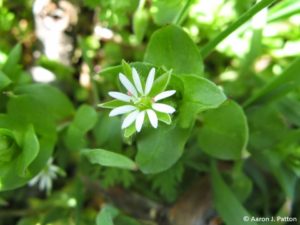 Cultural control: Mulching at a depth of three inches will discourage germination from occurring on many species in the landscape.  The presence of chickweed can be an indication of a cultural problem in the landscape or turf. For example, it thrives in compacted soils that are consistently moist or poorly drained. Its presence might indicate that the soil should be cultivated and irrigation practices should be adjusted to reduce excess moisture in the soil. Common chickweed also thrives in shady conditions.  Hand-pulling common chickweed when populations are small may also be an effective cultural weed management tool. 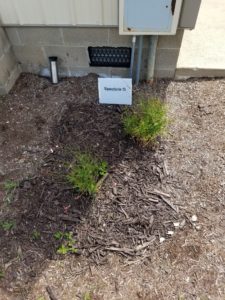 Biological control: None known for specific use in common chickweed. There are some organic postemergence herbicides available for turf weed control such as pelorgonic acid (Scythe), acetic acid (5% or greater solutions), and medium-length fatty acids (Eugenol); however, these products do not differentiate between the target weed and the vegetation (non-selective). As a result, these products are often used as spot treatments for weed control in parking lots, along fence rows, and in other bare-ground areas.

Other organic products that contain iron HEDTA (FeHEDTA), may be used to manage common chickweed; however, their ability to control common chickweed has not been effectively researched. 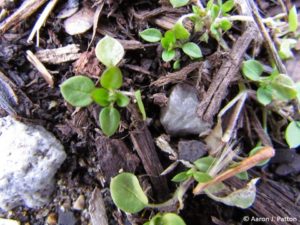 Figure 4. Seedlings of common chickweed can have a ‘succulent-like’ leaves.

Chemical control: Though a preemergence herbicide program should be your primary chemical control strategy, there are control options for common chickweed that include both pre- and postemergence options. Preemergence herbicides such as Gallery 75 (isoxaben), Pendulum (pendimethalin), Barricade (prodiamine), and Dimension (dithiopyr) are available for use in home lawns; however, it is important that they are applied prior to common chickweed germination in late summer/early fall.

Postemergence control can be achieved with repeat applications of glyphosate and glufosinate.

Most of these herbicides require supplemental applications for adequate control especially in spring when common chickweed plants are larger.