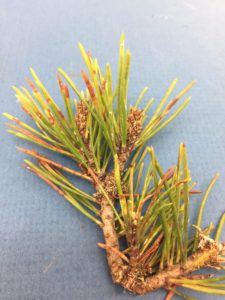 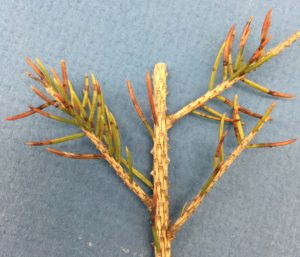 Microscopic examination of needles confirmed the presence of Dothistroma,(Fig 3) a fungus that causes red band needle blight. Needles infected with Dothistroma first exhibit dark green bands on the needles that are quickly replaced with brown or reddish brown lesions. Only the base of the needle will remain green, with the remaining portion tan or brown. (Fig 4) 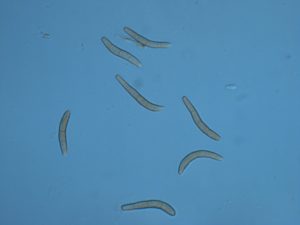 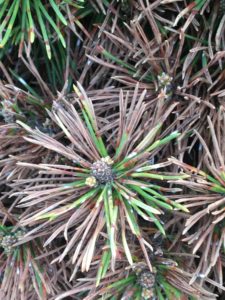 Infection is typically more severe in the lower portion of the canopy nearest the ground. (Figs 5 & 6) 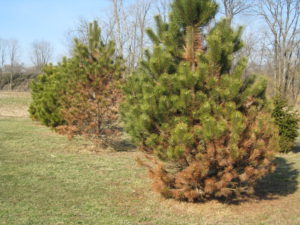 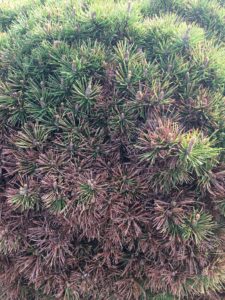 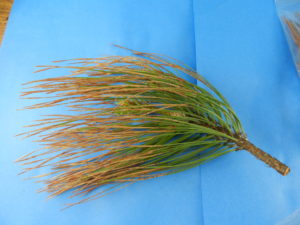 In late Fall, black fruiting bodies (Fig 7) appear on needles and mature to release spores the following Spring and Summer. The spores are spread by wind and rain and can infect needles throughout the growing season. New needles are susceptible once they emerge from the needle sheaths. 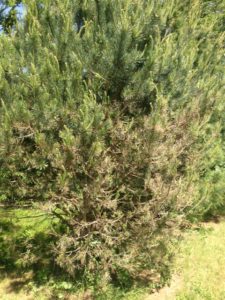 Infected needles may develop extensive browning 2-3 weeks after the first appearance of symptoms and drop prematurely rather than remain on the tree for their normal two to three years (Fig 8). For example, infected second-year needles are often cast (dropped) before the infected current-year (first-year) needles. Needles that become infected the year they emerge are often not shed until late summer the following year. Repeated severe infections over several years will result in decreased vigor and growth of the tree, ultimately causing death. In areas where Dothistroma needle blight is severe, you may want to consider planting another species of tree other than susceptible pines. It is reported that a number of coniferous hosts are affected but two-needled pines are particularly susceptible. Spruce is thought to be of low susceptibility, only becoming infected under high inoculum pressure.

Stressful site and environmental growing conditions, such as occur on berms, may predispose susceptible conifers to infection by needle blights. Improving the vigor of trees is important with regard to overall tree health. Watering during especially dry periods and mulching to help maintain a more consistent moisture level within the feeder root zones of trees will assist in reducing overall stress. (Conifer Dieback ID-477-W)

Sanitation is the recommended cultural management: remove any dead branches, and rake up and destroy fallen needles which harbor the fungus. This may slow the spread but will not provide full control.

Fungicide sprays may be practical on smaller trees for management of this disease. Fungicides prevent new infections–they do not cure existing ones. Diseased needles will continue to deteriorate and fungicides must be applied every year for several years before improvement is actually seen. As these fungicides aren’t curative, they will do nothing for last year’s infected needles so the tree may appear to get worse before it gets better.

Dr. Janna Beckerman, Purdue Ornamental Plant Disease Extension Specialist notes that labeled, protective fungicides sprays are limited to copper-based compounds such as Junction, and Camelot O in the landscape, and should be applied twice in the spring after new growth appears, and again 4-6 weeks later when new needles are expanded. For nursery or Christmas tree growers, Kocide 3000 is also labeled for control of this disease. During wet years, additional later applications may be needed. It is important to make sure that all needles are thoroughly covered with the fungicide spray. Keep in mind that these products are toxic to fish and other aquatic creatures! Do not apply to run-off, or apply directly to water, or to areas where surface water is present.

For confirmation of the specific needle blight fungus present on your conifers, submission of a physical sample of infected needles on symptomatic branches is necessary. (https://ag.purdue.edu/btny/ppdl/Pages/physicalspecimens.aspx)