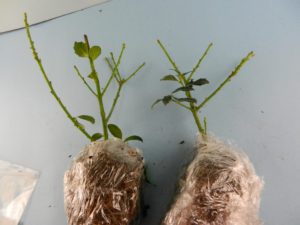 A group of samples of several varieties of blue holly (Ilex x meservae) arrived in the lab from a commercial nursery in late January with a common problem, yellowing and rapidly dropping leaves and general poor growth (Fig. 1).

After ruling out disease and insects on the foliage we next checked the root systems. After washing away most of the soil we started to see areas of black roots (Fig. 2, 3 and 4), especially at the root tips (Fig. 5).  Microscopic examination of roots confirmed the suspicion that the plants had black root rot (BRR), caused by the fungus Thielaviopsis basicola. The distinctive black segmented spores (chlamydospores) make it easy to identify in the lab (Fig. 6 and 7) 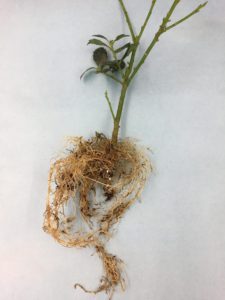 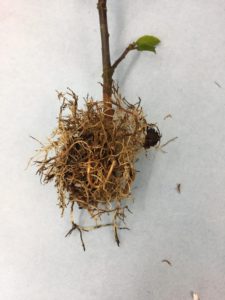 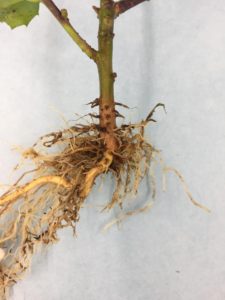 The fungus usually begins by only rotting scattered roots throughout the root system. As it spreads it can cause significant root loss and stunting of susceptible host plants. The pathogen mainly causes stunting and yellowing in Ilex x meservae but could also reduce plant tolerance to other stress factors such as heat, cold or nutrient problems. In this case the amount root rot probably would not cause the extensive leaf drop the grower was seeing. After a phone call we came to the conclusion that while BRR was causing stunting and plant stress, the major leaf drop was more likely a reaction to excessive heat buildup in the overwintering structure. 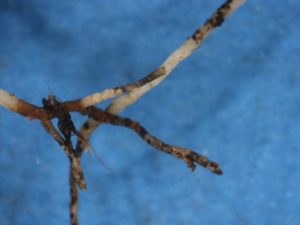 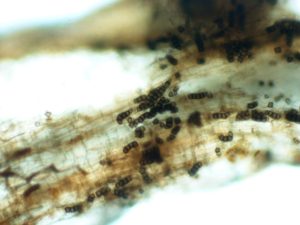 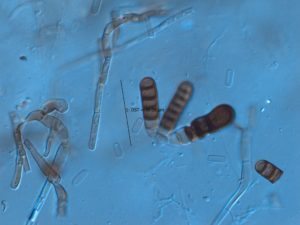 Thielaviopsis chlamydospores (Fig. 6 and 7) are resistant to drying and cold and make it difficult to eliminate the pathogen from production systems. It can be spread by infested pots, water, media, movement of infected plants, or vectored by soil-inhabiting insects such as fungus gnats and shore flies. Fungicide drenches can slow development but will not cure infected plants so diligent sanitation to remove infected plants and debris is important for management. Infected plants that appear normal may go undetected and result in spreading Thielaviopsis to garden centers and landscapes. Once landscape beds are infested the fungus remains in the soil for years. Fungicides drenches containing Thiophanate methyl can be used in nursery and greenhouse crops to prevent infection and Orkestra has been found to be suppressive. Fungicide drenches are impractical and generally ineffective in landscape beds and the main recommendation is to avoid using highly susceptible plants in infested beds. It’s also impractical and ineffective to try to get rid of the fungus by digging out and replacing infested soil. Stick with resistant plants.

So what plants are resistant to Thielaviopsis? That’s a tougher question to answer. We don’t have documented studies on this but observational data suggests the following plants are likely resistant or tolerant of the fungus:

Woody plants: American holly is tolerant and English and Chinese hollies are generally considered resistant and can be used where they are winter hardy.

Thielaviopsis is known to occur on these plants but is reported infrequently so they are probably tolerant: Campanula (Bellflower), Lobularia maritima (Sweet alyssum), Pachysandra, Peony, Poppy, Salvia, Verbena.

Keep in mind that even tolerant plants can succumb to disease if the growing conditions are poor.  Avoid excess fertilizer and try to make sure landscape beds have good drainage.