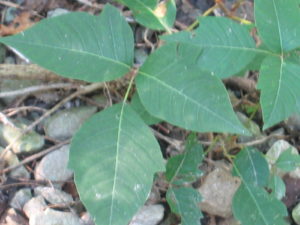 Poison ivy has a compound leaf made of three leaflets. The terminal leaflet has a long stalk.
Photo credit: Rosie Lerner

Poison ivy leaves are compound rather than simple – a single leaf is divided into three separate portions, called leaflets. Plants with three leaflets are often referred to as being trifoliate. Another key identifying characteristic is that one side of a leaflet may have an irregularly toothed margin, while the opposite edge may be smooth or barely toothed.

Poison ivy is typically a vine that can climb quite high by means of aerial rootlets.  But older poison ivy plants, especially those that have been cut back repeatedly, can take the form of a shrub.

Poison ivy flowers are rather inconspicuous and usually not noticed by gardeners. The subsequent fruits are greenish white, smooth berries in clusters about the size of currants. Birds and other wildlife eat the berries and then spread the seed in their droppings. So poison ivy can show just about anywhere.

Fragrant sumac, a small shrub, is also trifoliate, but none of the leaflets have stalks.  Their fruit are red and slightly fuzzy. 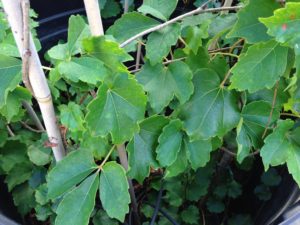 Young Boston ivy also has a compound leaf made of three leaflets. Each leaflet is attached by a short stalk. Photo Credit: Rosie Lerner 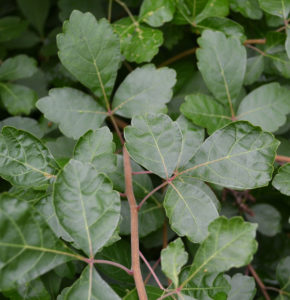 Fragrant sumac also has a compound leaf made of three leaflets. The whole leaf has a stalk, but Individual leaflets are without stalks. Photo Credit: Purdue Arboretum

All parts of the poison ivy plant, including the stem and roots, contain and secrete a nonvolatile oil that affects the skin. This oil is insoluble in water. That means if you simply wash with water alone after coming into contact with poison ivy, you may spread the oil to other areas and increase the discomfort.

Once established, the woodiness of the poison ivy plant makes it difficult to control. Repeatedly cutting the plant back to the ground may eventually starve the plant; however, each time you cut it you expose yourself to the oil. You can dig up and discard small plants, but if you leave behind any portion of the root system the plant will likely re-sprout.