Plants that experience extremes in soil moisture may develop spots on their leaves, called “oedema” (also spelled “edema”). The spots may first appear as a blister or raised spot, particularly on the undersides of leaves, but may occur on the top side as well as on the stems. Eventually, the blister develops a rust-colored, cork-like scab.

Some species of plants are more susceptible to oedema and is most commonly seen in the greenhouse on ivy-leaf geraniums but also on pansies, jade, and other thick-leaved plants.  Oedema can also occur outdoors on landscape plants, notably English ivy, bayberry, hibiscus, yew, and boxwood. 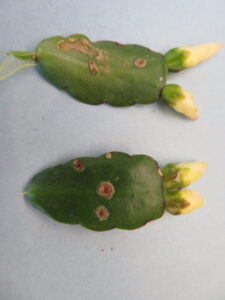 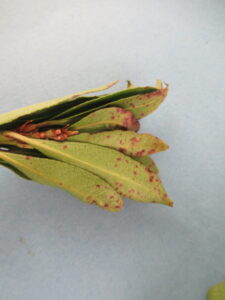 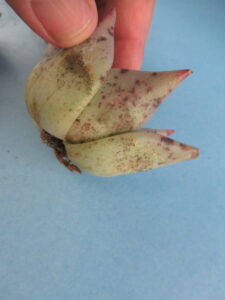 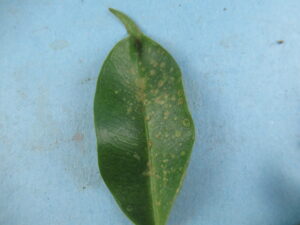 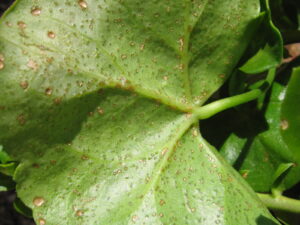 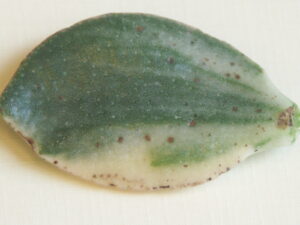 Oedema occurs when a plant takes up more water than it is losing water through transpiration. When plants have been subjected to overly dry conditions followed by abundant moisture, the plant cells take on too much water too rapidly, causing them to burst, which then dry out and create characteristic corky tissue. The blisters may also appear when soils are abundantly moist, coupled with cloudy, humid weather.  Transpiration is slowed in high humidity.

Oedema spots do not spread and is not really considered harmful to the plant. But the resulting corky tissue will remain unsightly. On thinner leaved plants the dead tissue may dry and fall away leaving a “shot-hole” appearance. So while this may not cause significant damage to  plant health, it could impact marketability of plants in the garden center or client satisfaction in the landscape.

Subsequent foliage should not be impacted as long as water relations improve.  To prevent oedema from occurring, avoid extremes in watering practices. Consistent irrigation frequency and landscape mulch will help avoid extremes in the soil moisture supply.