This Nootka falsecypress (Chamaecyparis nootkatensis) is showing severe dieback throughout much of the tree (fig. 1 and 2). The primary pathogen present is a fungus in the genus Diplodia. Small twigs are infected first, which eventually leads to dieback of larger branches (fig. 3). Note the spherical black spore bearing structures (pycnidia) at the base of needles shown in fig. 4. The dark spores (fig. 5) are spread by wind and splashing rain to other areas where they start new infections. Little research has been done on the diseases of falsecypress in the mid-West but the fungus appears to causing damage similar to problems it causes on other conifers, such as Austrian pine (https://www.purduelandscapereport.org/resource/diplodia-tip-blight-of-two-needle-pines/). 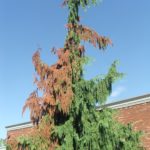 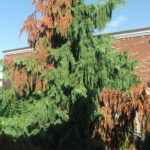 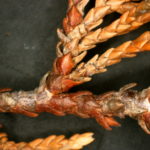 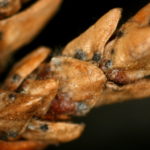 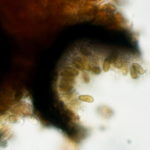 Nootka falsecypress is native to coastal areas of the Pacific Northwest where they get abundant rainfall and have moderate summer temperatures. This specimen was growing between a sidewalk and a parking lot and had been through several cycles of heat and drought over the years.  Trees under stress from growing outside their natural range will be more susceptible to fungal infections. As with Diplodia tip blight on pine the disease will likely be very difficult to control and spraying a tree this large may be impractical. Dead twigs can be trimmed off but the existing fungus inside the needles and branches will continue to grow and new dead stems will show up. Adequate mulch and watering during dry periods will help reduce moisture stress but it may be too late to save a tree in this condition. Replacing the tree with a species better adapted to the site will be the best long-term solution to this problem.