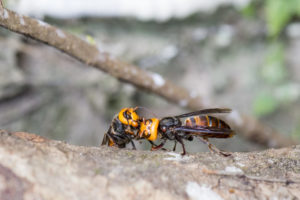 Headlines all over the country have been sounding the alarm about “murder” hornets. Should you be worried? Yes and no. The presence of these hornets in the United States is bad news for bees and beekeepers alike but there’s no need to panic yet.

Where did they come from and where are they right now?

The Asian giant hornet originally came from tropical and temperate Asia. We are currently only aware of introductions in British Columbia and Washington State. It’s very unlikely that you’ve encountered one if you live in other parts of North America.

Are they in Indiana yet?

No, they have not been seen in Indiana nor have they been seen in any states near us. It is highly unlikely that there are any Asian giant hornets in Indiana.

What’s with the name?

The name murder hornet is a misnomer. They’re not malicious. They’re just hungry, efficient hunters. If you’re interested in learning more about this hornet, try looking under one of its other names: Asian giant hornet, giant Asian wasp, giant Japanese hornet, giant sparrow wasp, or, if you know a bit of Japanese, オオスズメバチ.

Are they going to hurt me or my family?

To date, only a single colony has been discovered in Washington state. It remains unclear how successful members of that colony were at overwintering and if they established new colonies this spring. Therefore, you’re very unlikely to encounter an Asian giant hornet. However, should you find a colony, don’t approach them as their stings can be serious and can even lead to death. Beekeepers are the most likely to encounter Asian giant hornets and should keep aware of the states in which this hornet has been found. In general, you should use the same caution that you do with any stinging insect. They are not generally aggressive but will defend their nests or the beehive they are attacking. They generally nest in wooded areas in abandoned borrows in the ground.

How do they impact bees?

Unlike Asian honeybees (Apis cerana), the European honeybees (Apis mellifera) we keep in the United States don’t have any defenses against these hornets*. Asian giant hornets mark beehives with a scent that attracts other hornets. They quickly kill the bees in the hive often by decapitating them. Once they are finished with this process, some of the hornets guard the beehive while the other hornets collect and kill the larval bees. The hornets then bring the bee larvae back to their nest to feed to the larval hornets. This process generally occurs in late summer and early fall. These hornets also eat many other types of insects like praying mantises and large caterpillars.

How are they different from native or already introduced hornets?

The simplest difference? They are BIG and have a bright yellow head. These hornets are much larger than any other wasp or bee in North America. You can find a handy size comparison here.

Can we prevent them from becoming a problem?

Officials in both Washington state and in Canada are working hard to eradicate them. There’s hope of stopping them if we act aggressively right now and sustain our efforts in the coming years. It’s much easier to stop invasive species before they have the opportunity to establish and multiply. You can help by learning about the invasive species that are likely to be in your area, keeping an eye out for them, and letting someone know if you see them using the resources below.

What should you do if you see one?

You probably will not see an Asian giant hornet in Indiana anytime soon but if you think you’ve seen this hornet or any other invasive species you should report it! Follow the steps we recommend on reportINvasive.com:

*The Asian honeybee (Apis cerana) has a series of really dramatic defense mechanisms that can protect them from these hornets. Once they’ve detected that their hive has been marked for attack by the Asian giant hornet the bees work together to make a warning noise that essentially lets the hornets know that they’re prepared for a fight. Many times, the hornets will give up at this point and look for another hive. If the hornets do still land on the hive the bees will cover the hornet in a giant living ball of bees and vibrate so much that it raises the temperature of the ball high enough to kill the hornet.