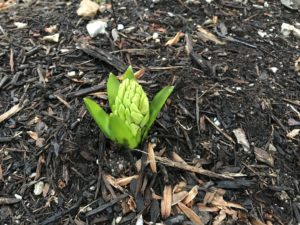 It’s not unusual for Indiana weather to have trouble deciding what season it is. Warm spells during the dormant period often lead to bulbs poking their foliage (and sometimes flower buds) through the soil.  While we’re more used to seeing this happen during February warm spells, our frigid temperatures arrived a bit early in the Fall of 2019 followed by intermittent unseasonably mild weather.

There’s not much you can do about bulbs that have sprouted, but the good news is that in most cases, the bulb itself should still be well protected and may bloom as normal, though we still have plenty more weather to endure before bloom time!  The degree of potential damage the foliage and possibly the blooms will depend on how advanced the development of foliage and flower buds when they are exposed to sub-freezing temperatures. 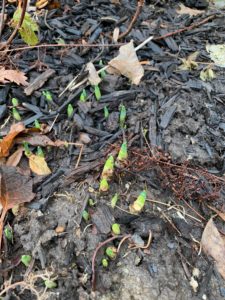 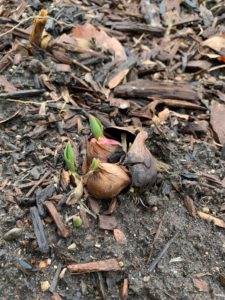 An additional problem that may especially be an issue this year is frost heaving. Repeated cycles of alternate freezing and thawing causes water in soil to expand and contract, which can lead to bulbs and herbaceous perennials being pushed up to the surface of the soil.   Most susceptible are shallow-rooted plants or those planted in late fall that didn’t have a chance to establish a deep root system before soil freezing.  Waterlogged or poorly drained soils will be most affected due to high moisture content.

Frost-heaved plants may have exposed roots that will be further damaged by winter weather.  If the ground is not frozen, you could gently tamp the plants back into the soil.  Then cover with several inches of mulch such as straw or shredded bark.  To prevent frost heaving in the future, mulch susceptible plants after the ground freezes to help lessen fluctuations in soil temperatures.  But in a winter like this one, mulch may not be enough to stop the heaving.