Hollyhock (Alcea spp.), an anchor plant for the back of the cottage garden, bloom mid-summer with numerous flowers on tall spikes, providing beauty for us, and food for bees, hummingbirds and butterflies. The most common varieties are biennial, taking two years to complete their lifecycle, although some persist as short-lived perennials. Fortunately, they are prolific self-seeders. 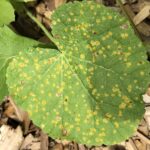 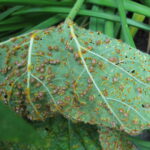 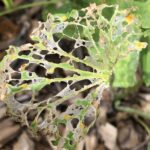 Figure 3. Skeletonization due to rust, Japanese beetles and other pests!

Unfortunately, to some unenlightened folk, they are susceptible to rust, a disease caused by the fungus, Puccinia malvacearum. In June, the initial symptoms of hollyhock rust are small, yellow-orange spots (~⅛ to ¼ inches in diameter) on the upper leaf surface.  Two weeks later, as the disease progresses, turning the leaf over reveals red-orange to brown pustules on the undersides of leaves directly beneath the yellow-orange spots appearing on the upper leaf surface.  Early rust infections are often unnoticed until the outbreak becomes severe. Lesions may also develop on stems and buds. In many gardens, it is a competition between rust and Japanese beetle to see what skeletonizes the leaves first.

The hollyhock rust fungus overwinters on dead tissues infected with rust the previous year. From these overwintering sources, the rust fungus produces a great number of  spores in the spring, infecting young seedlings nearby. Spores are also easily distributed by winds and rains. Warm and humid temperatures favor the growth of the fungus. Unlike many rust fungi, hollyhock rust is autoecious, meaning its entire life cycle occurs on just the hollyhock, or other susceptible members of the Malvaceae, including other garden annuals and perennials [flowering maple (Abutilon spp.); checkerblooms (Sidalcea spp.)(Fig. 4); rose-mallow (Lavatera spp.)(Fig. 5), and common weeds, like cheeseweed (Malva spp.)]. 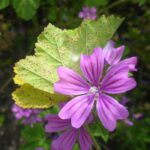 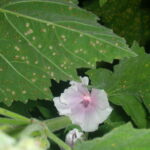 Remove any cheeseweed that can serve as a source of inoculum. In the fall, remove all hollyhock debris to eliminate overwintering inoculum.  Do not save or use seeds from infected plants. Inspect any volunteers or new hollyhock transplants for rust symptoms and rogue out infected individuals.  If purchasing plants, some less susceptible varieties include the ‘fig-leaf hollyhock (A. ficifolia)  and hybrids of it, including Antwerp Mix’, ‘Happy Lights’, ‘Las Vegas’, and ‘Old Fashioned Mix’. The lemon yellow Russian hollyhock (A. rugosa) is also reported to be resistant, but in my experience, is similar to the fig-leaf hollyhocks, and is only less susceptible.

On of the biggest drivers of hollyhock rust is poor airflow and wet foliage. Avoid planting hollyhocks too densely to improve air circulation, reduce humidity, and promote quicker drying of foliage.  Avoid overhead watering and fertilize only if needed. This disease can be easily prevented through the use of any FRAC Code 3 fungicide, examples of which include propiconazle, myclobutanil, or tebuconazole, and are available to formulations for homeowners and professionals.

Alternatively, you can simply plant hollyhocks in the back of the garden, let it get infected and live with it.  Overtime, you may learn to enjoy those orange spots and the added biodiversity they bring to the flower bed.